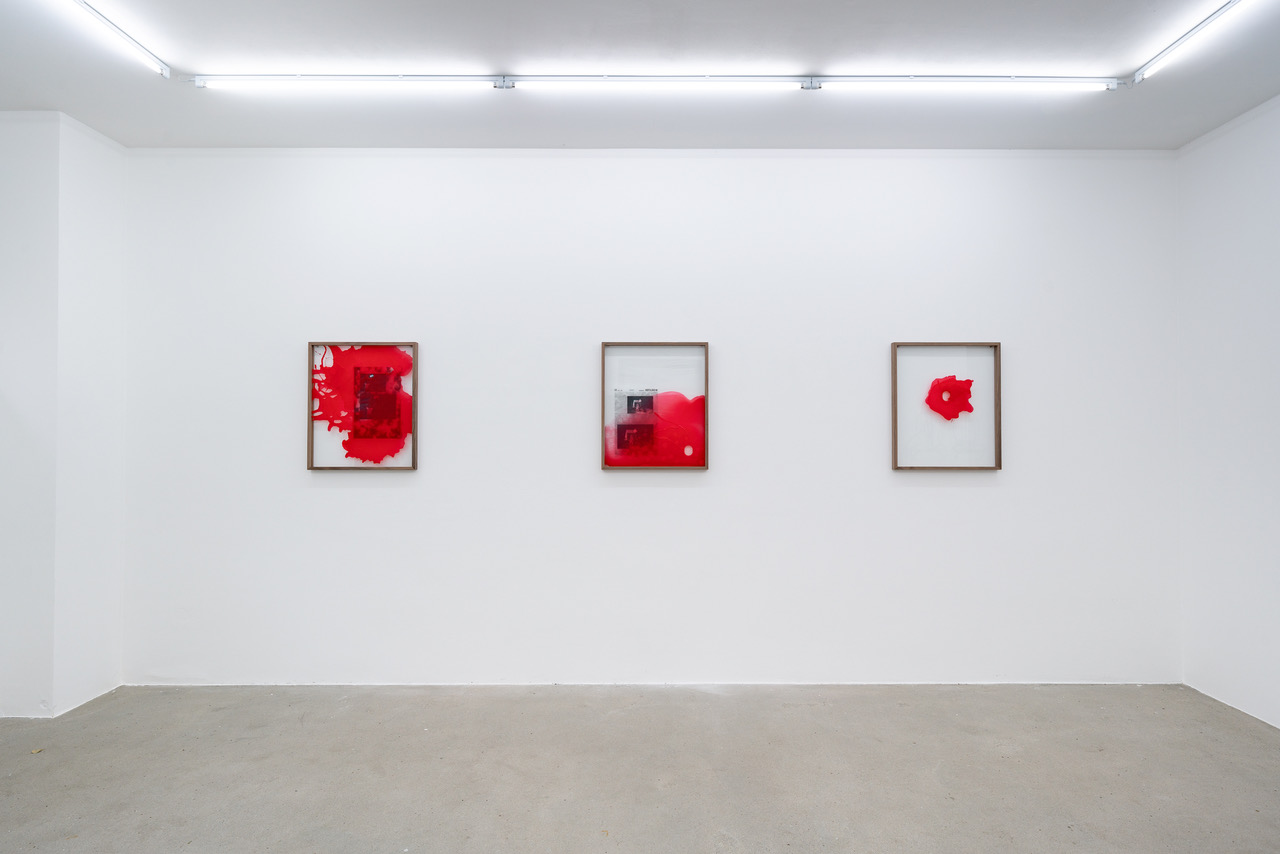 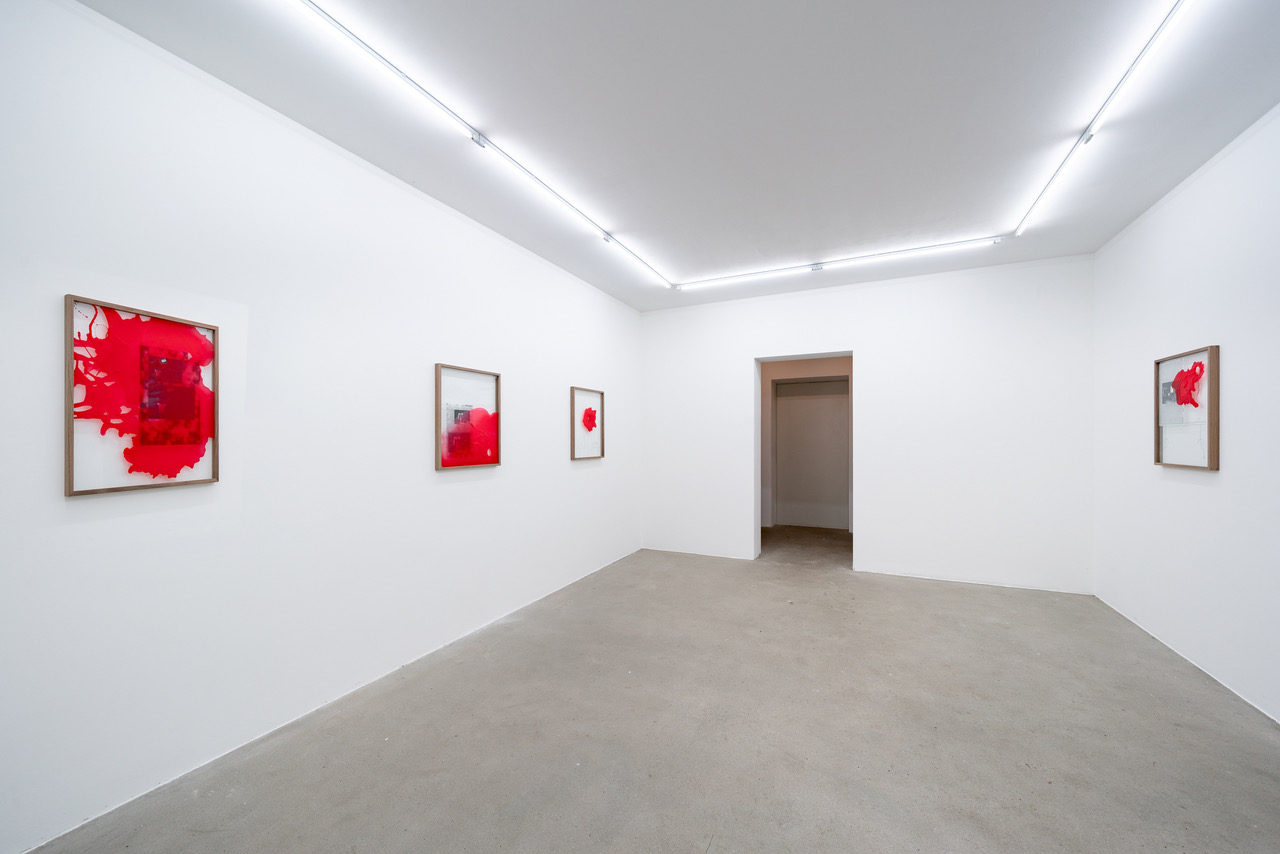 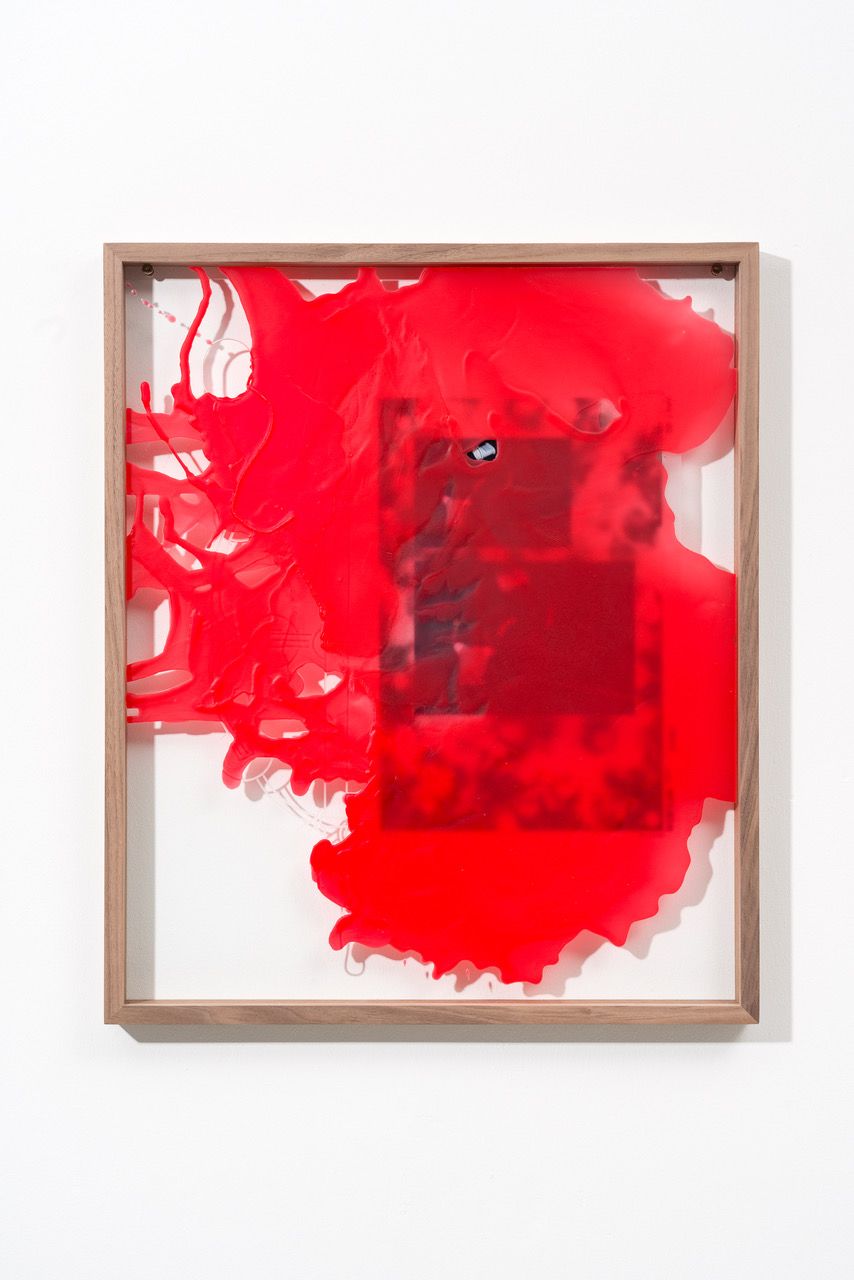 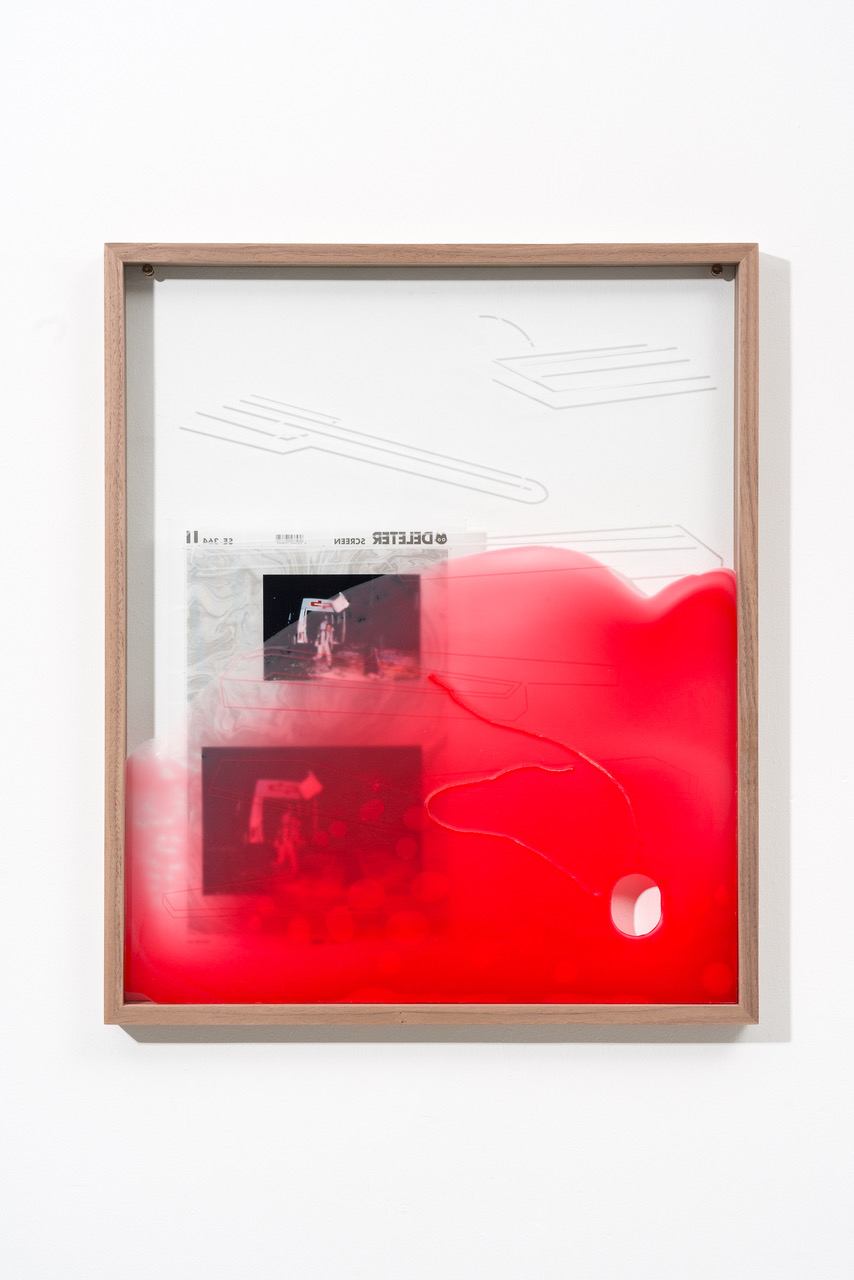 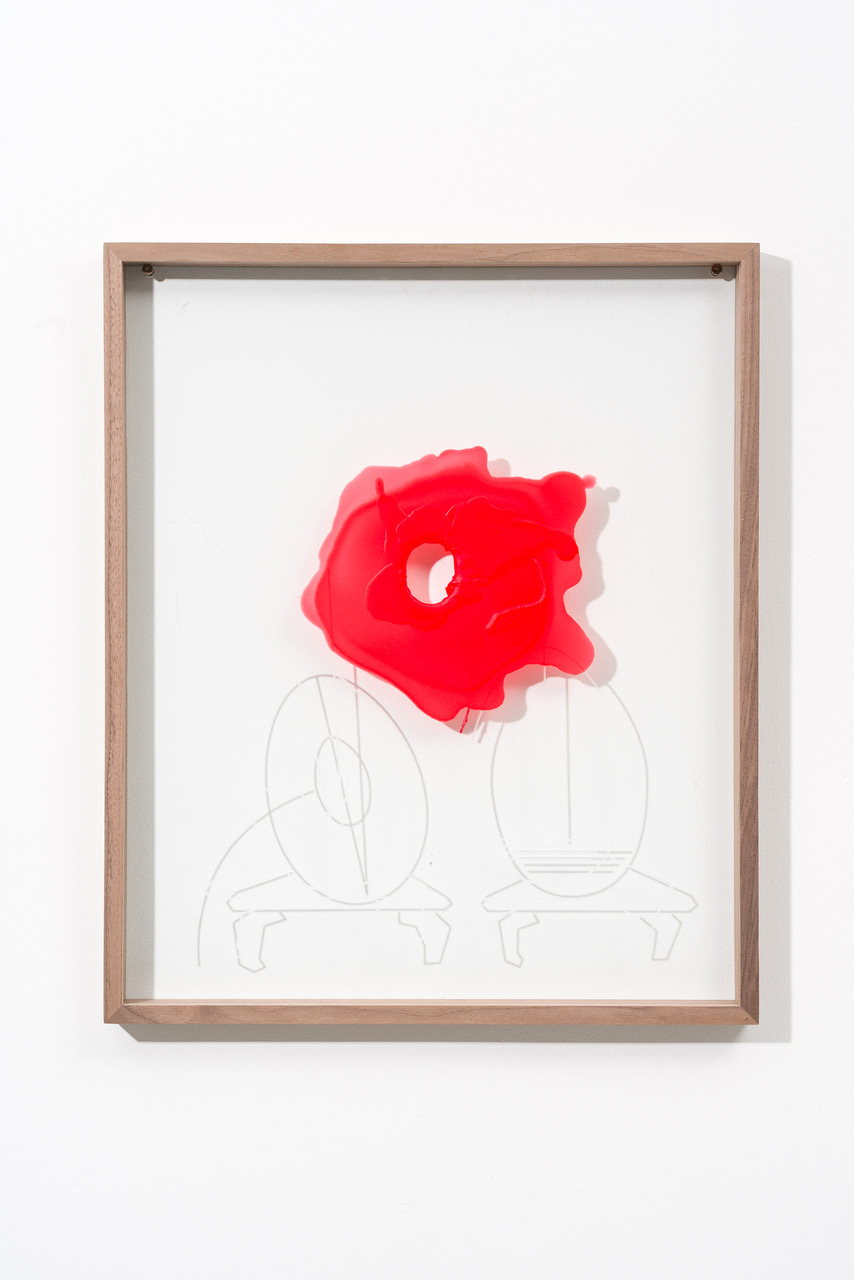 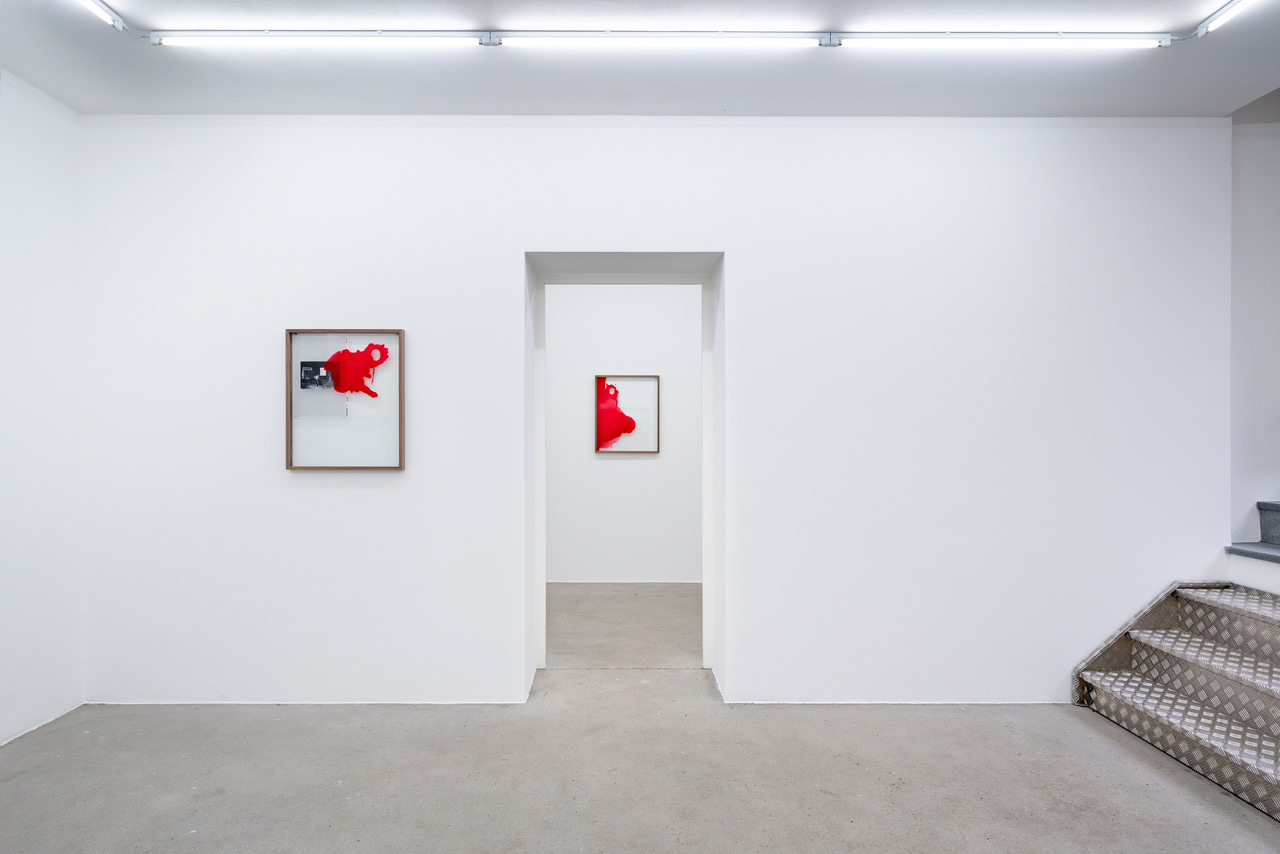 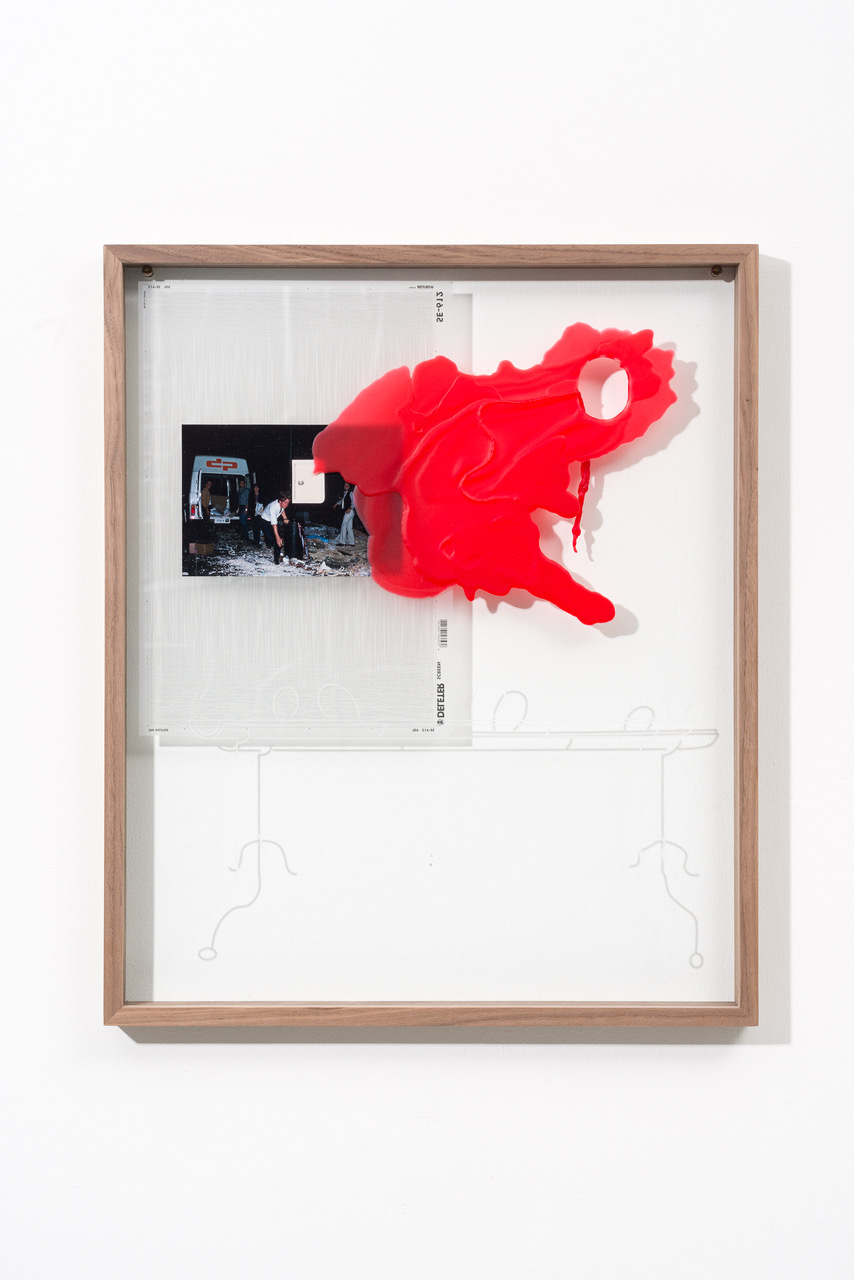 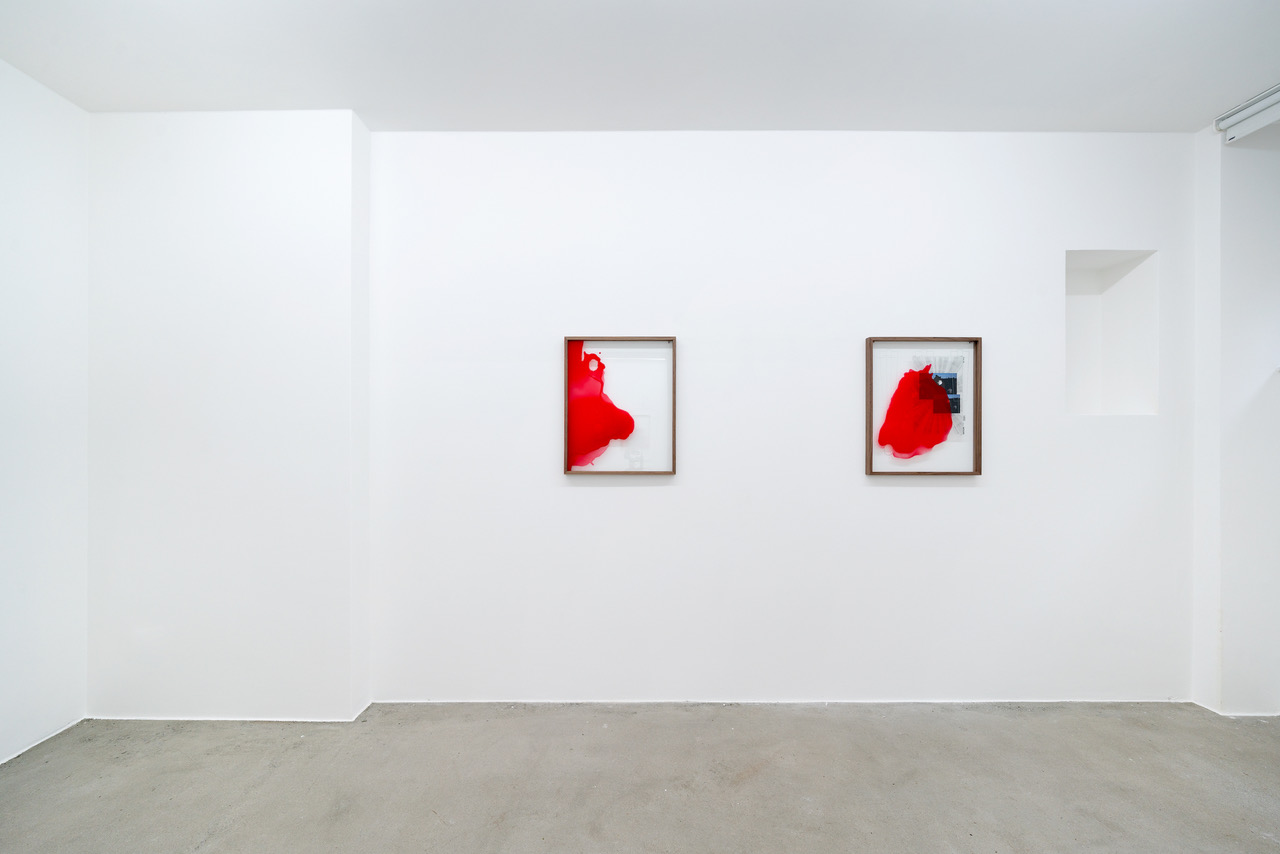 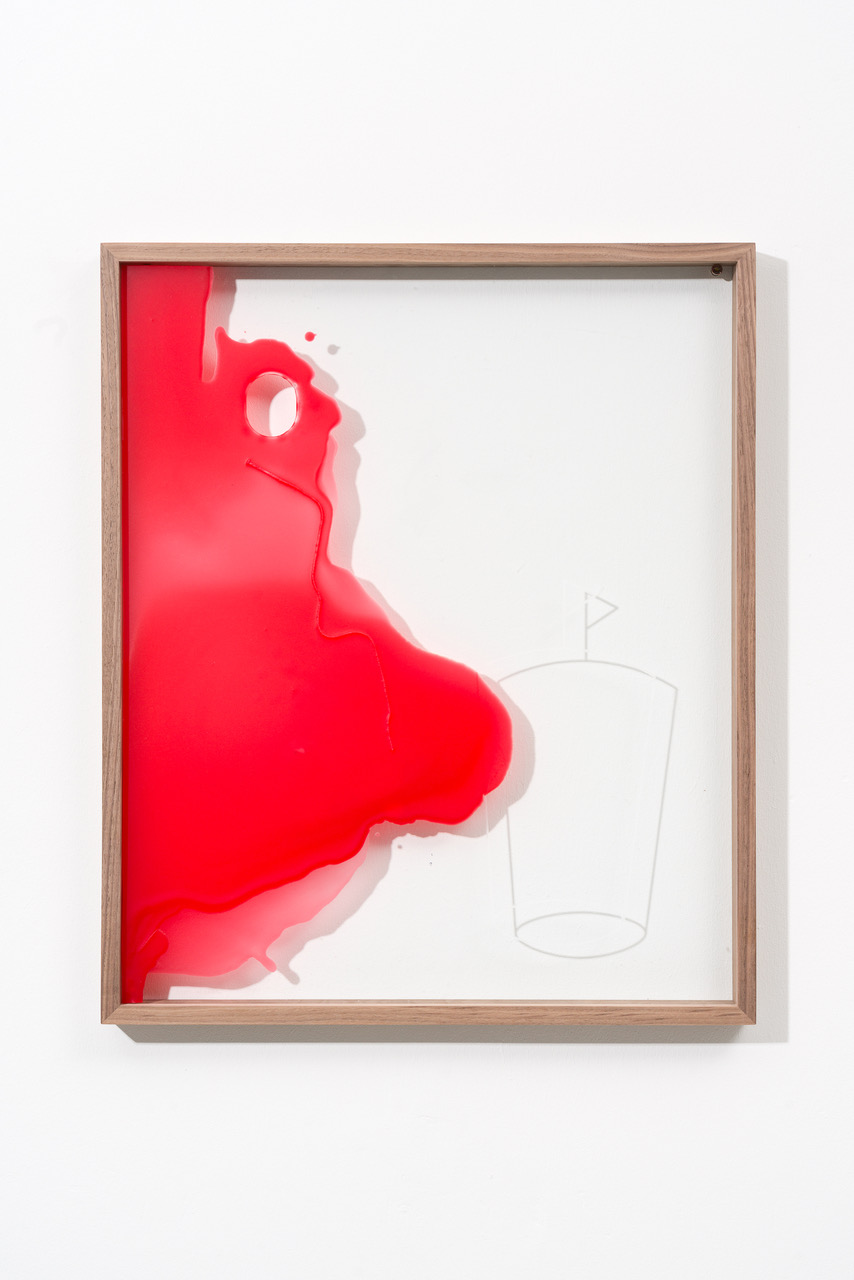 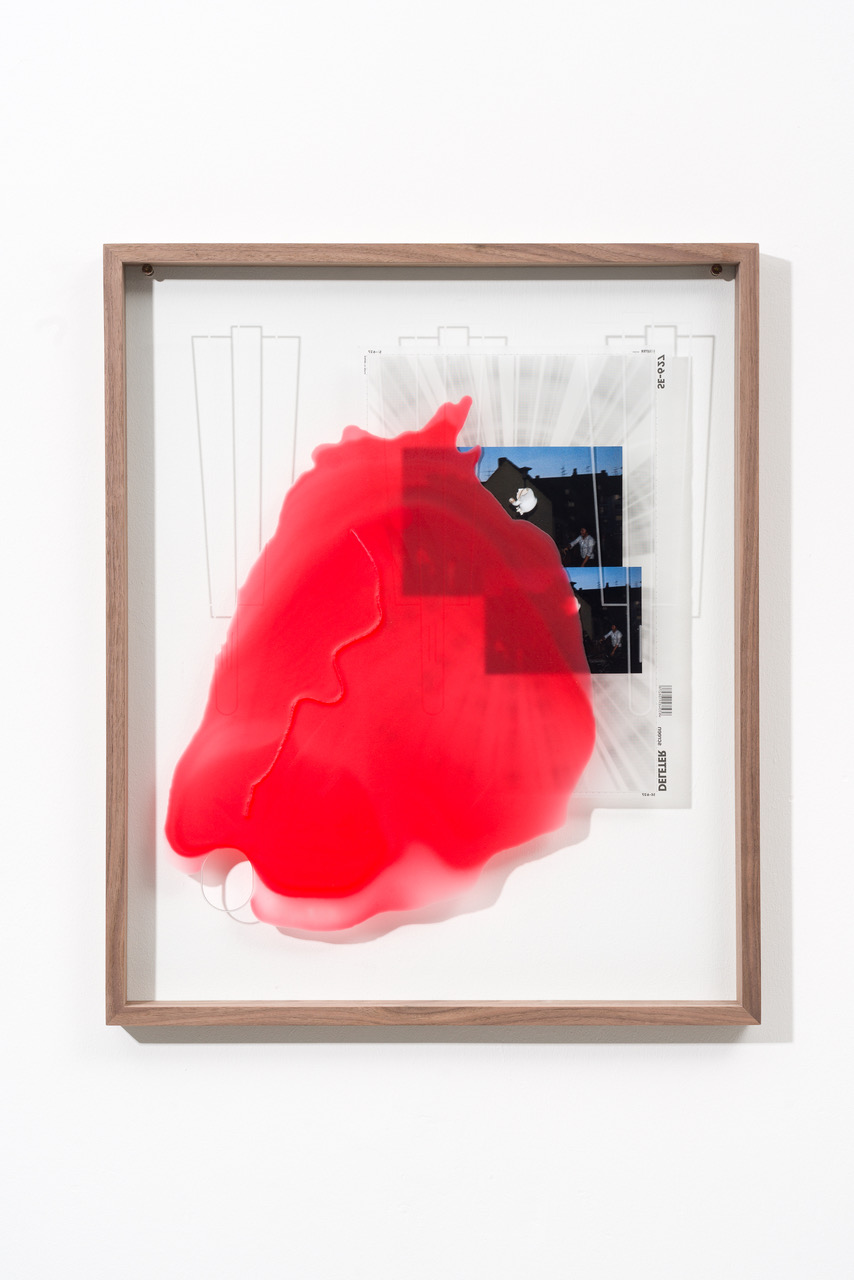 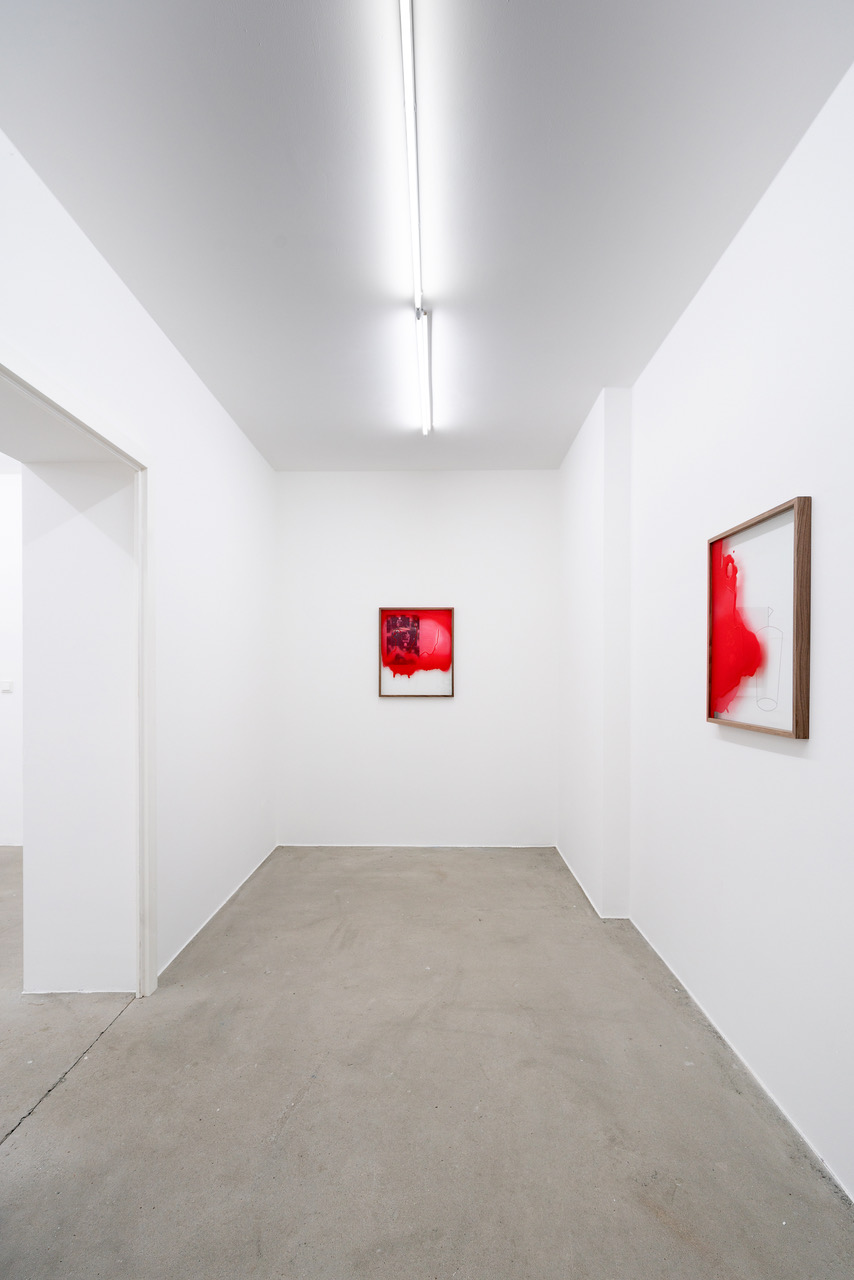 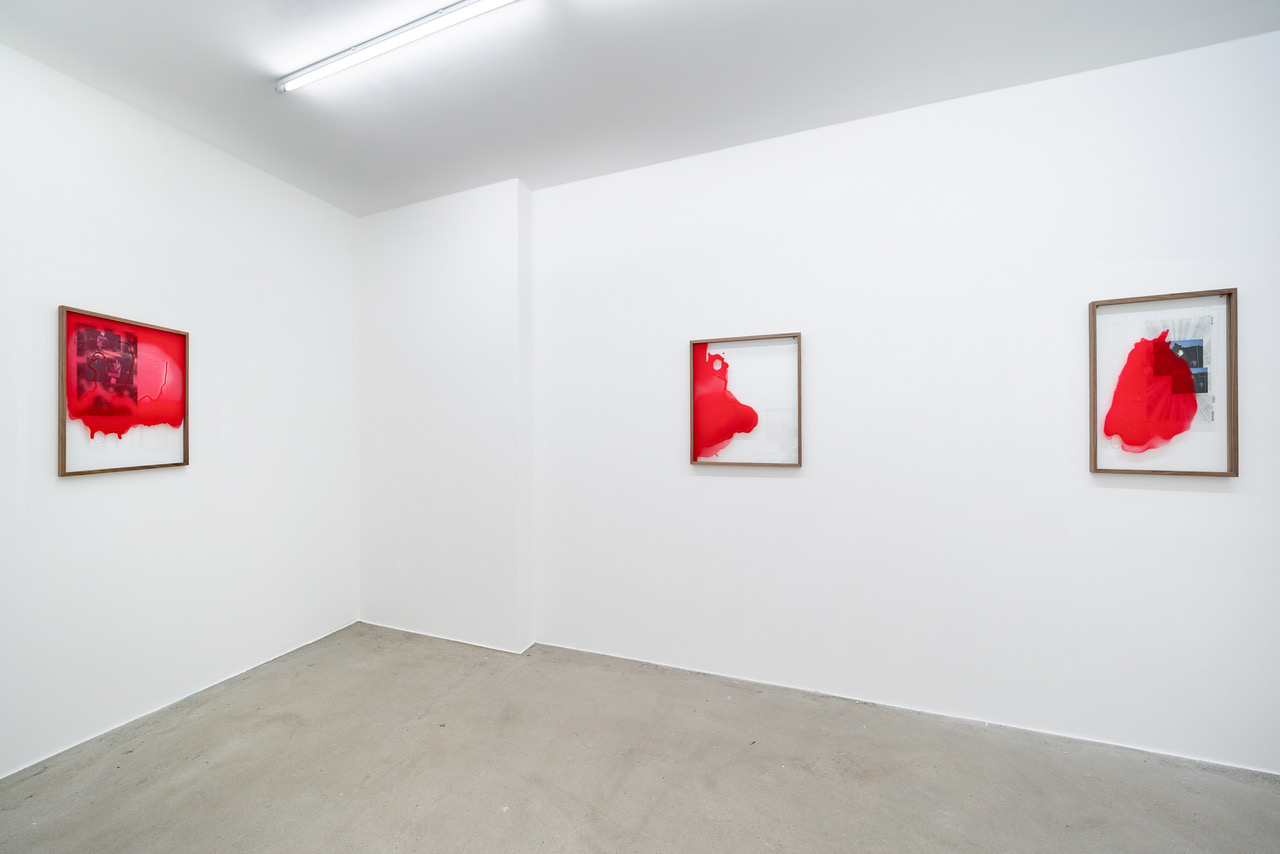 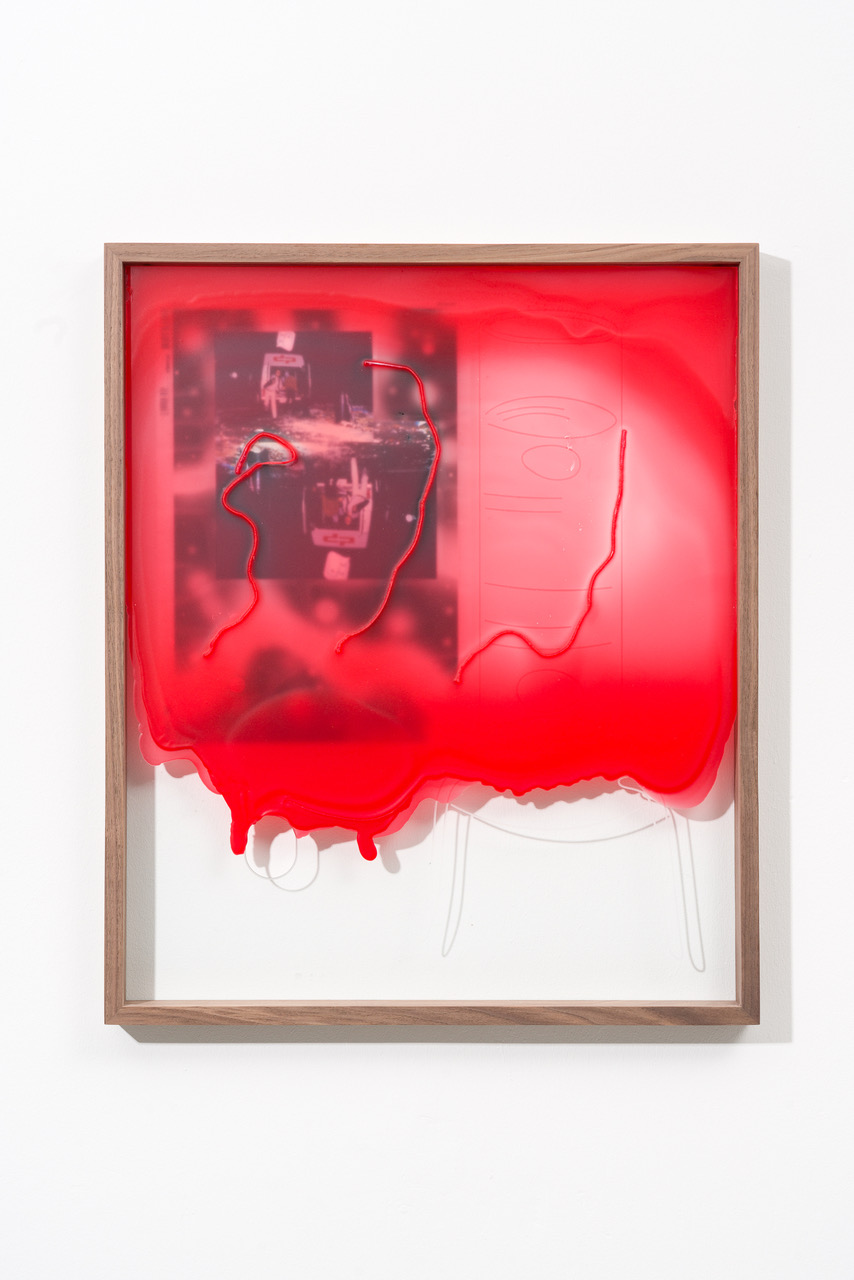 At first glance, the room resembles a crime scene: white gallery walls with traces of bloodred, framed by walnut- colored wood. Shortly after this first moment of alienation, we realize that these framed areas on the wall are, in fact, transparent glass plates. An amorphous mass seems to have haphazardly oozed through a gaping hole in the glass and seeped onto the other side of the panel. The in part opaque material partially obscures the plates’ fine engravings, which appear, depending on the light’s angle, as fleeting shadows on the wall behind.

A reference to earlier bodies of work by the artist is also inscribed by means of engraving in the works. Timo Seber found the drawings, upon which these forms (eggs? fans? pipes?) are based, in a Japanese book from the 1890s. He had previously already transferred the title page of this book—two gothic, elongat- ed skeletons— onto glass panes for a prior exhibition (Name something that isn‘t a shadow of its former self, 2019). The book, titled Handbook of Western Magic, is not a treatise on early modern European witchcraft but simply an illustrated guide to performing harmless magic tricks at home—and thus also a form of documentation and transfer of in- tangible knowledge that was apparently associated with ‚Western‘ cultures.

Not only do these semi-visible illustrations of mundane magic tricks and his use of glass as a material refer to earli- er works; the strangely elongated hole also appears in various older works. For a window installation at the Aktion- shaus Lempertz in Cologne, for example, Seber prominently places this form on larger-than-life paper cutouts that undoubtedly allude to partitions of public toilets (Platz für neue Freunde, 2009). In light of this genea- logy, it is also not far-fetched to interpret the material void found in these new works as an appropriation of that glorious hole—the breakthrough for anonymous, semi-public, and casual sex in gay culture. Contrary to what the name Glory Hole suggests, its optimal form is also not circular but, as in Seber‘s work, vertically elongated, thus accommodating different body sizes and allowing a certain degree of freedom of movement. As a site of pleasurable exchange, the Glory Hole allows for the transfer of bodily mass, while interrupting and partitioning the otherwise cohesive body. The hole facilitates an almost machine-like coupling of mouth and penis, whereby the anonymity of the person be- hind the wall functions as an essential element and allure of the sexual act itself.

Clearly the transparency of the material as well as the scale of Seber‘s work, and ultimately its status as a work of art, prevents that kind of misappropriation. However, its material properties bear distant witness to the con- ceptual origins of the Glory Hole itself, which actually originated in glass production and, according to the Oxford English Dictionary, referred to the opening of the melting furnace: „The large goods receive a final reheating at the mouth of a pot heated by beech-wood, and called the Glory Hole,“ as a glassmaker from 1849 explains, somewhat sugges- tively from today‘s perspective. Although Seber did not actually melt glass around his glory holes, the red substance was once a long candle, which the artist melted by heating the glass around the hole‘s opening, causing the liquid wax to freely assume a new shape of its own.

This red coating gives the panels an almost carnal appearance: the hole in the space can therefore also be seen as an abstract body orifice, which clearly does not diminish the sexual suggestiveness of the works. Such lascivious interpretations are counteracted by the photograph, which the artist filched from his parents‘ photo album and which—as in previous exhibitions—depicts a scene of bourgeois domestic bliss in (Western) Germany—a Polter- abend („bachelor party“), a custom that loudly proclaims and celebrates the entrance into marital, domestic, and monogamous heterosexuality. The same image adorns the facade of the Berlin Ufer Studios, where Timo Seber is realizing the exhibition Heterosexual Panic together with MYSTI at the same time as I‘d appreciate your input. Here, the aforementioned skeleton glass panels reappear, transformed into platforms suspended from the ceiling, upon which candles inserted into vaseline containers flicker pensively. This setting provides another input. Or per- haps a method to ensure a smooth transfer of the candle back through the hole? This time, however, in solid form.