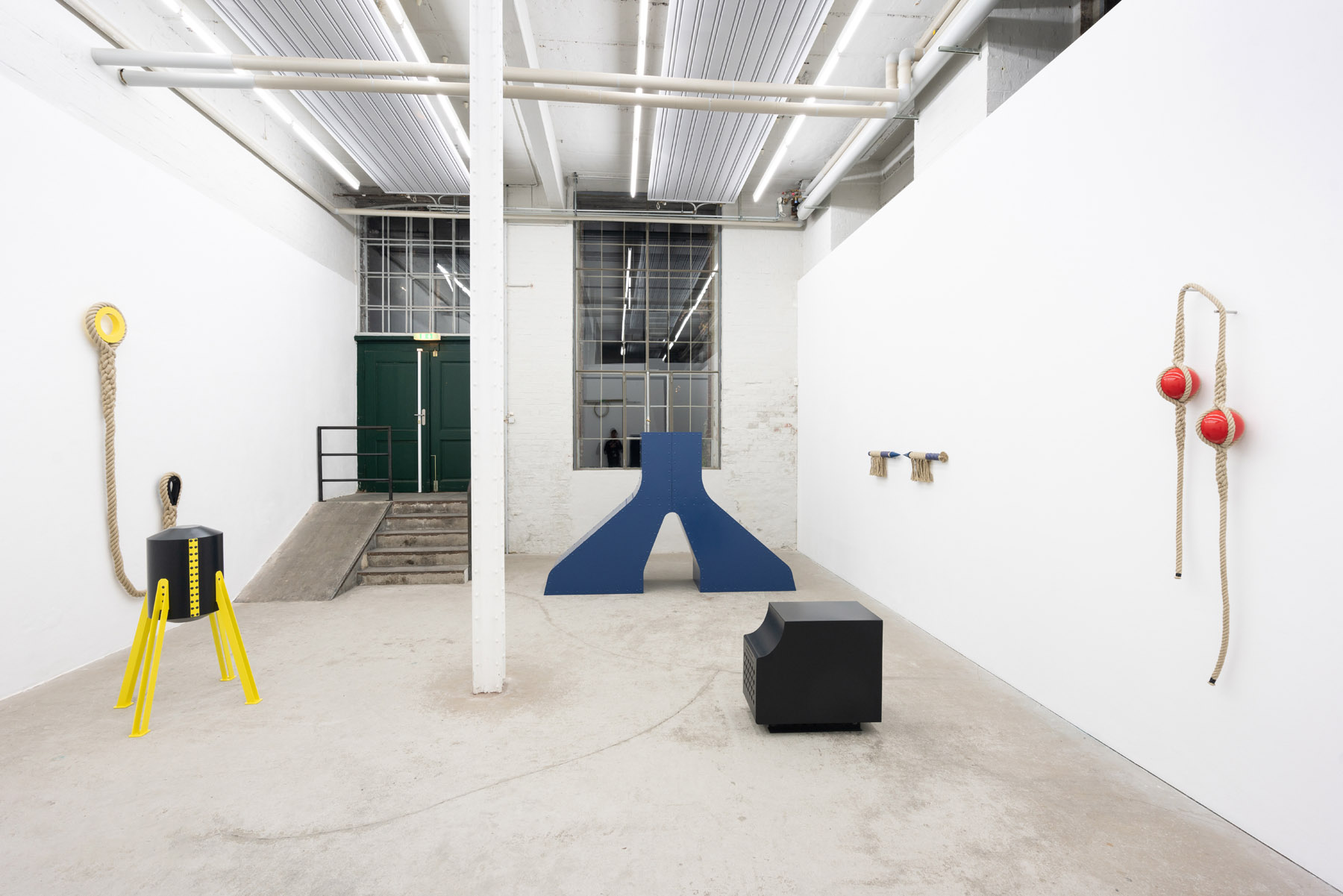 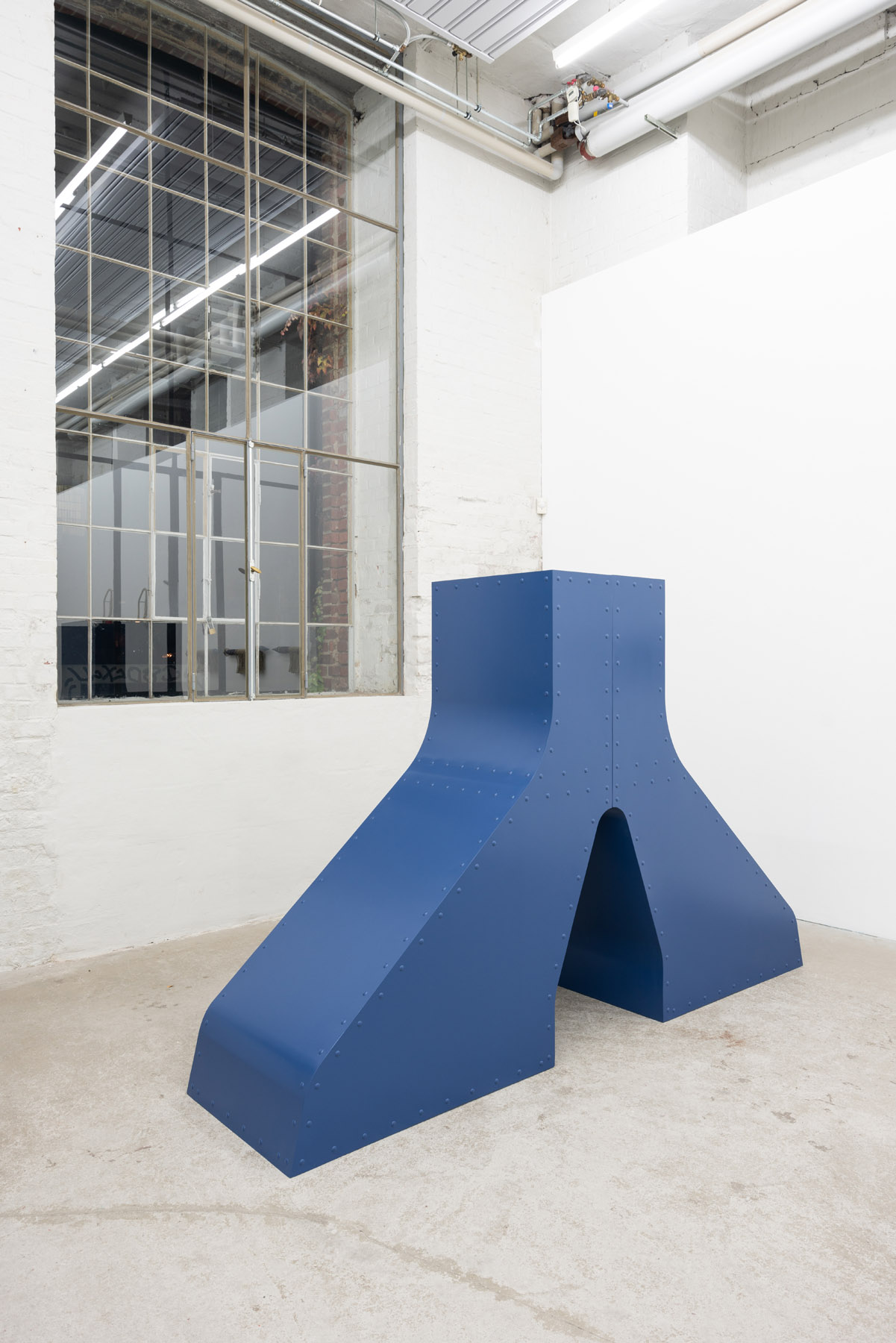 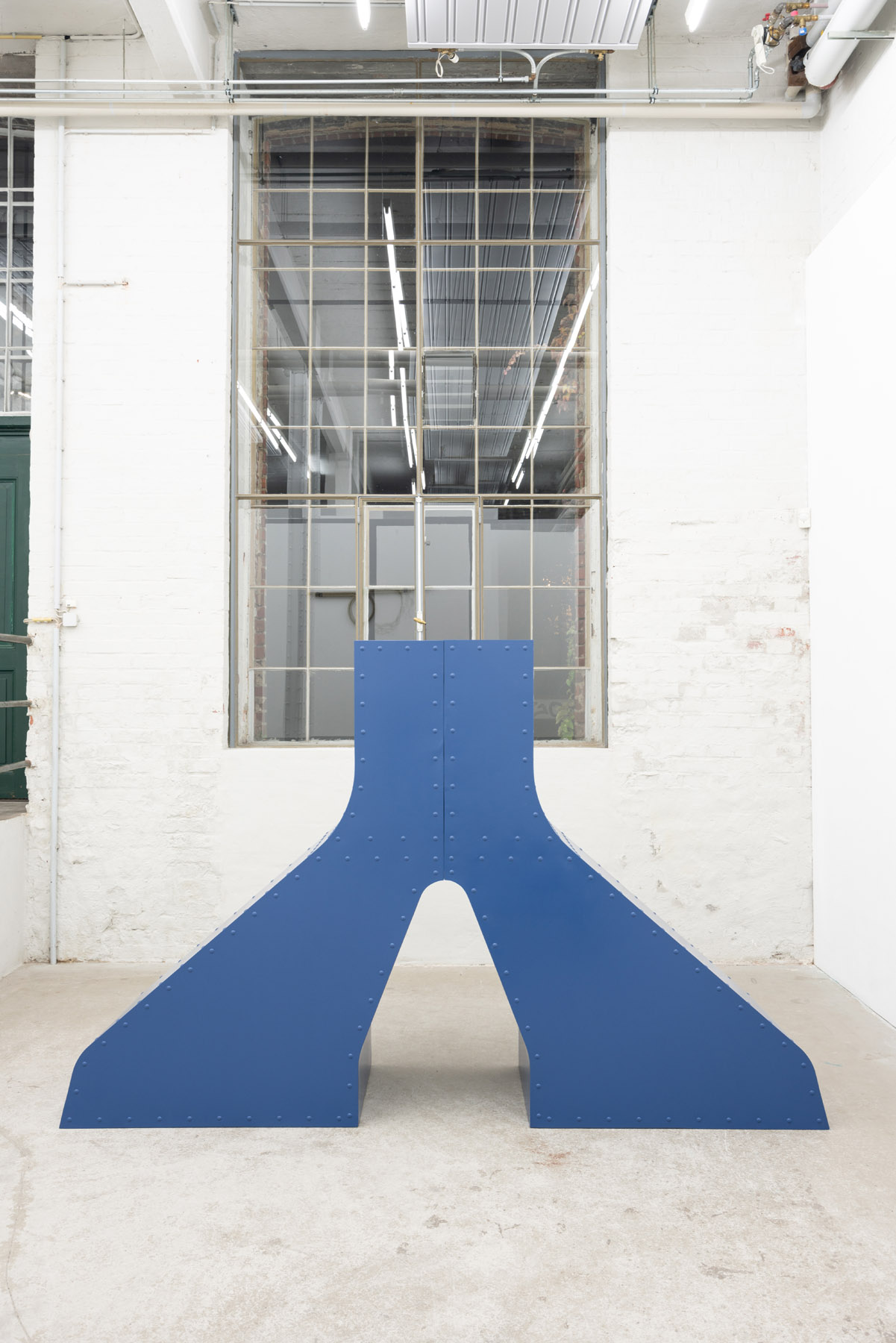 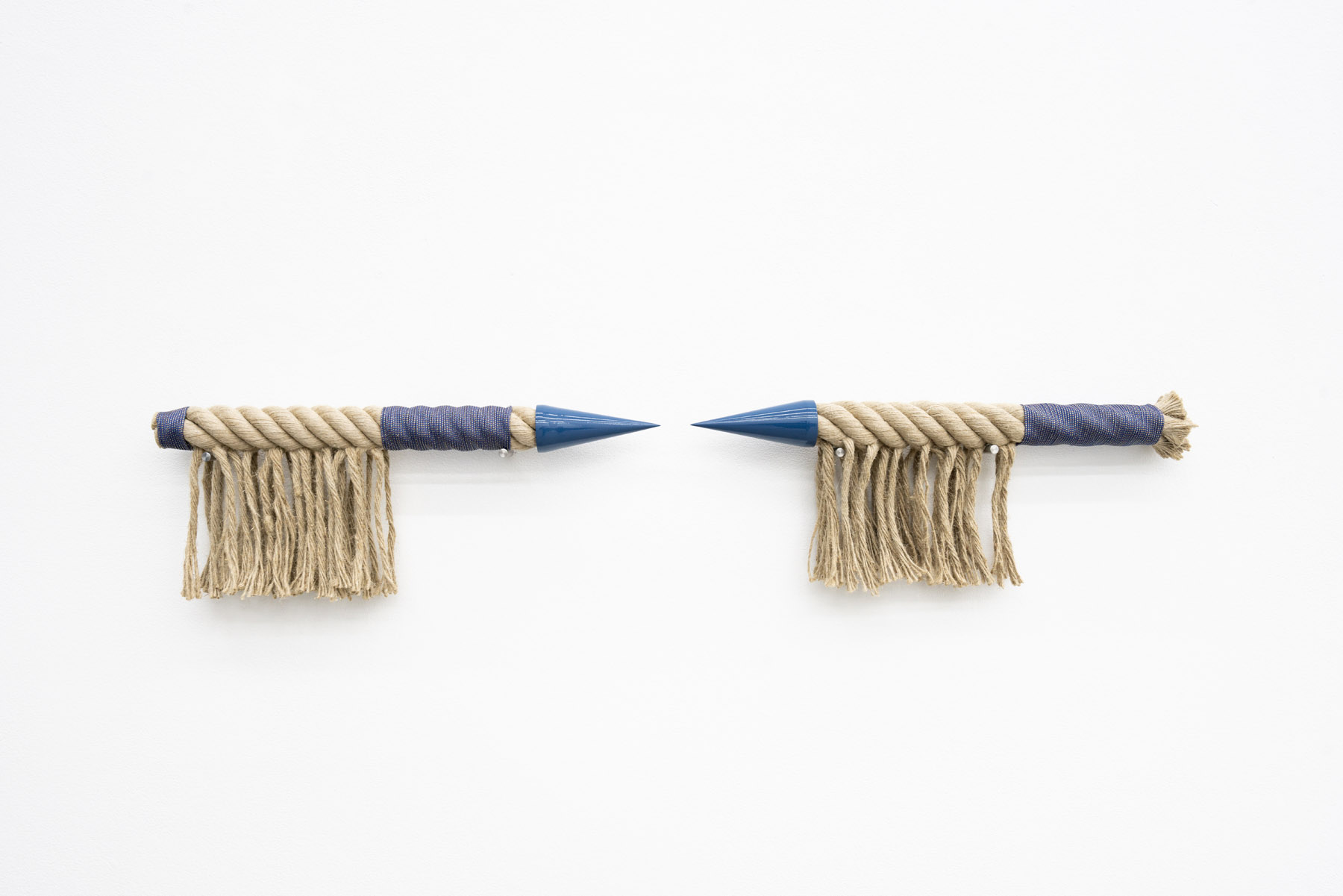 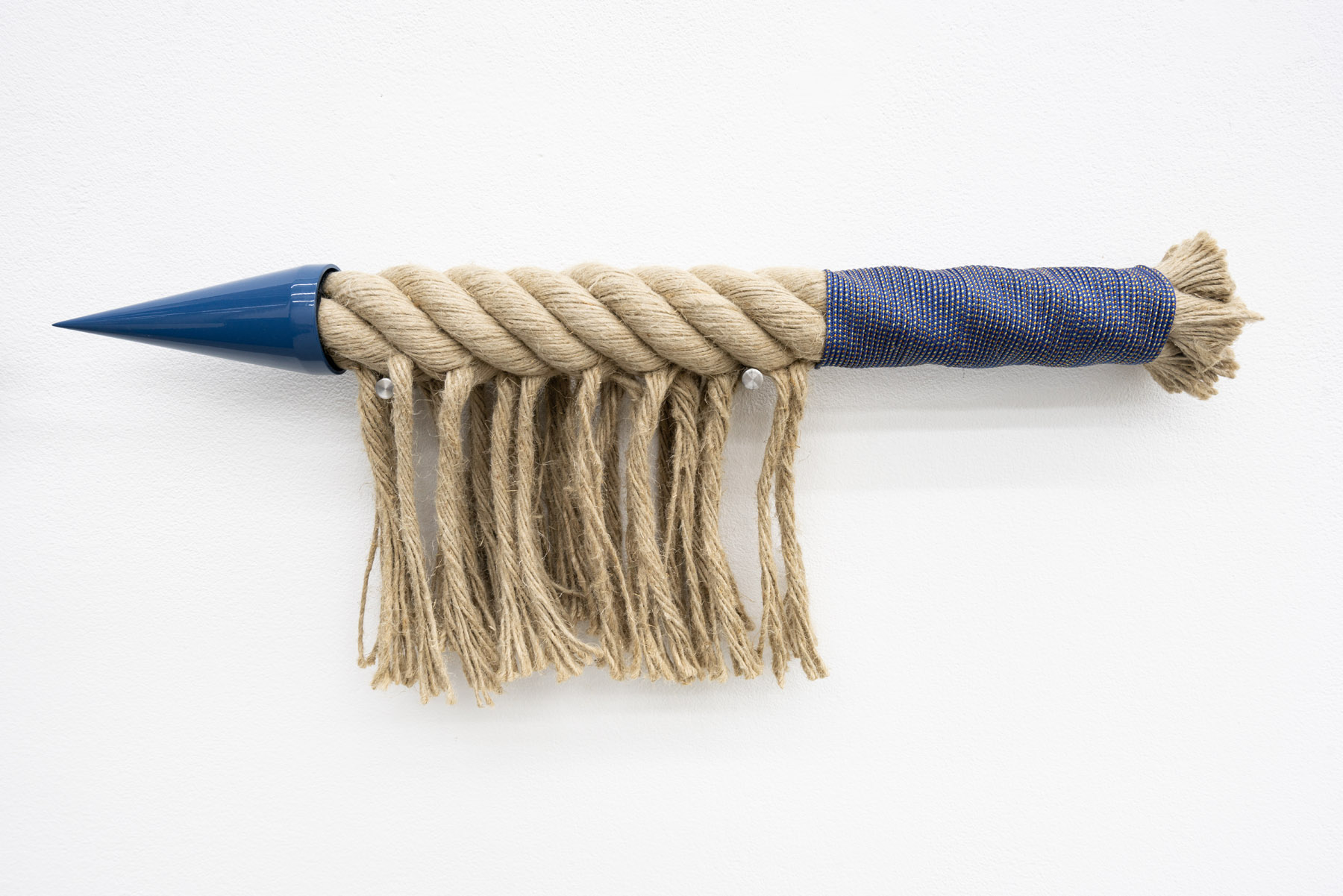 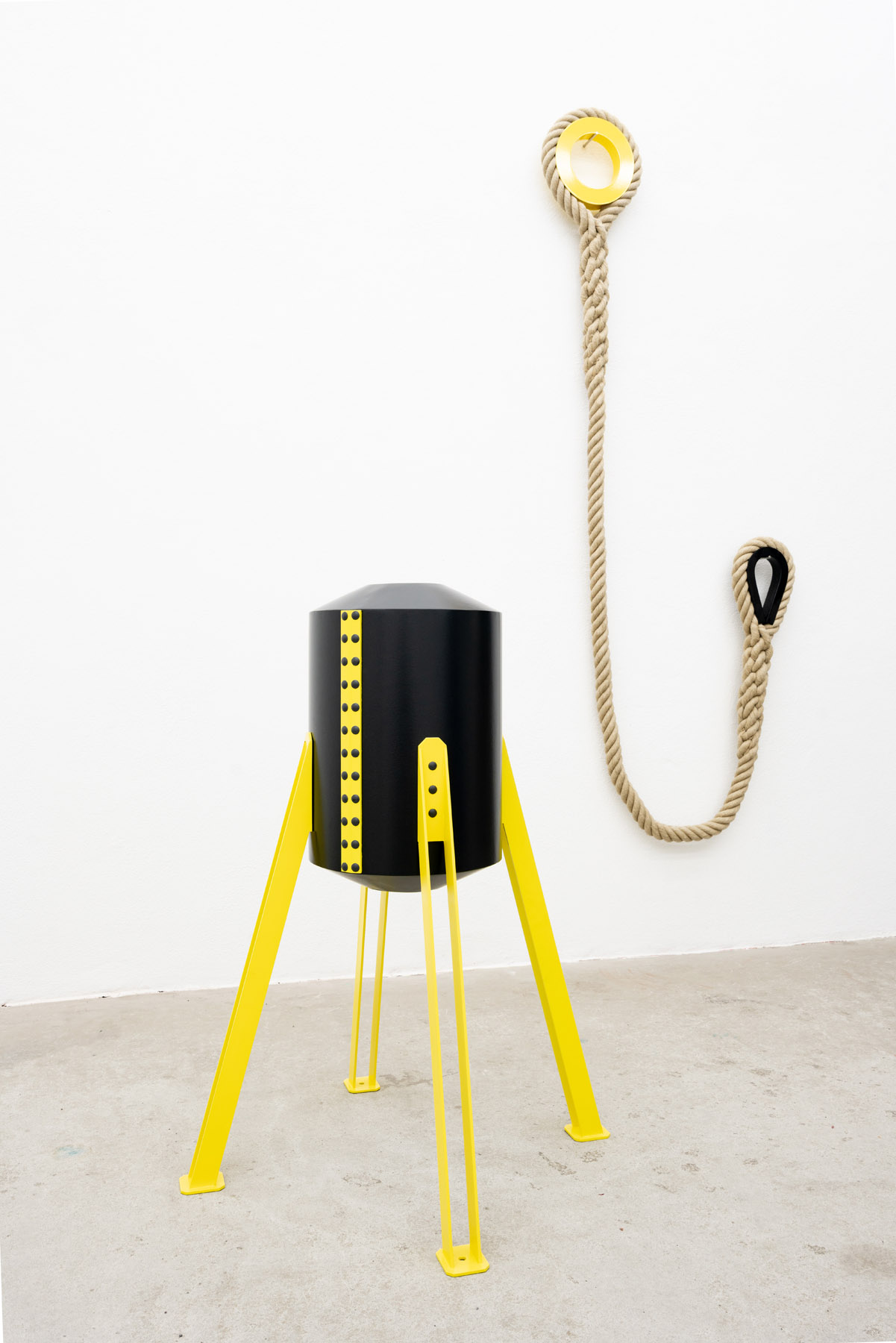 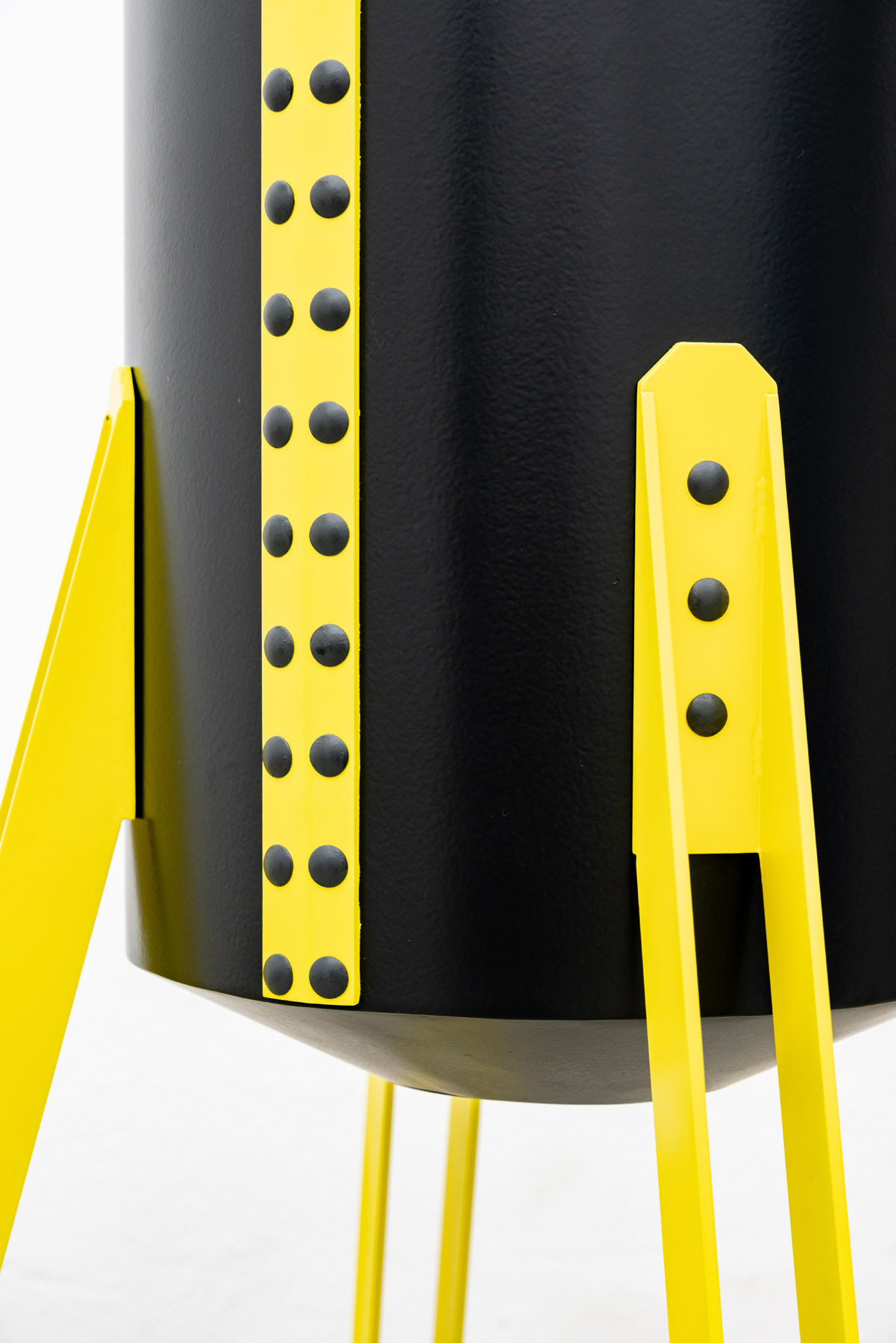 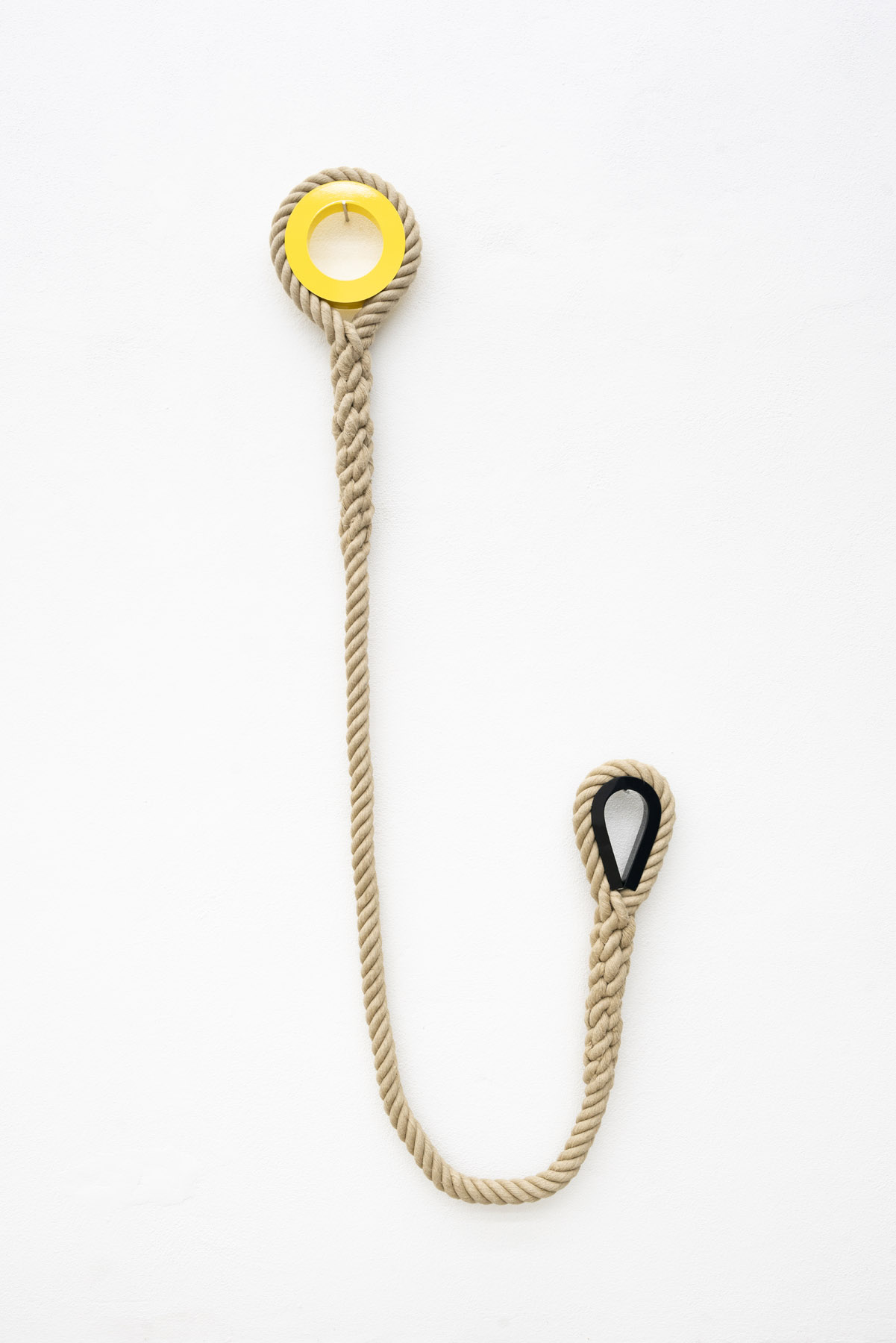 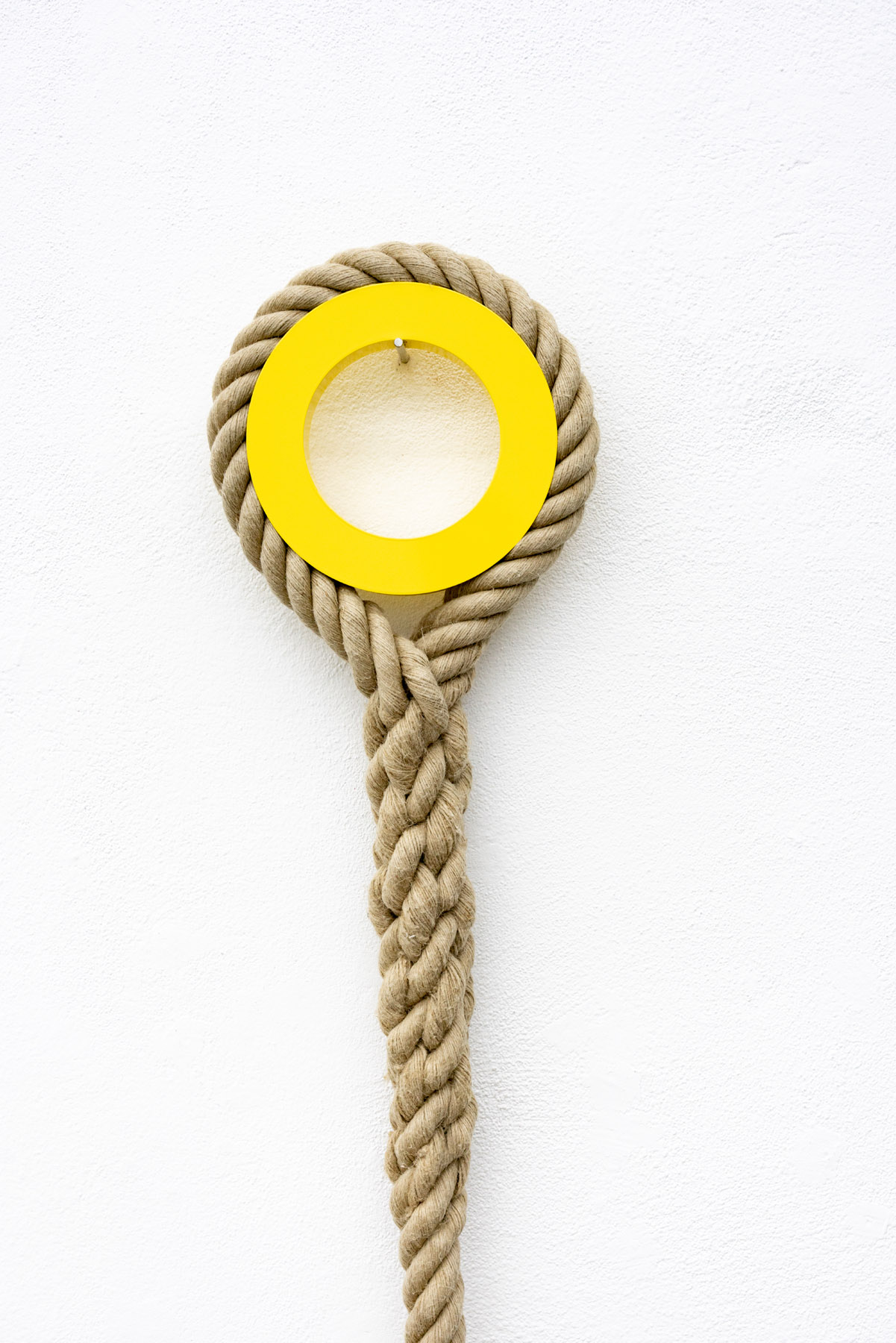 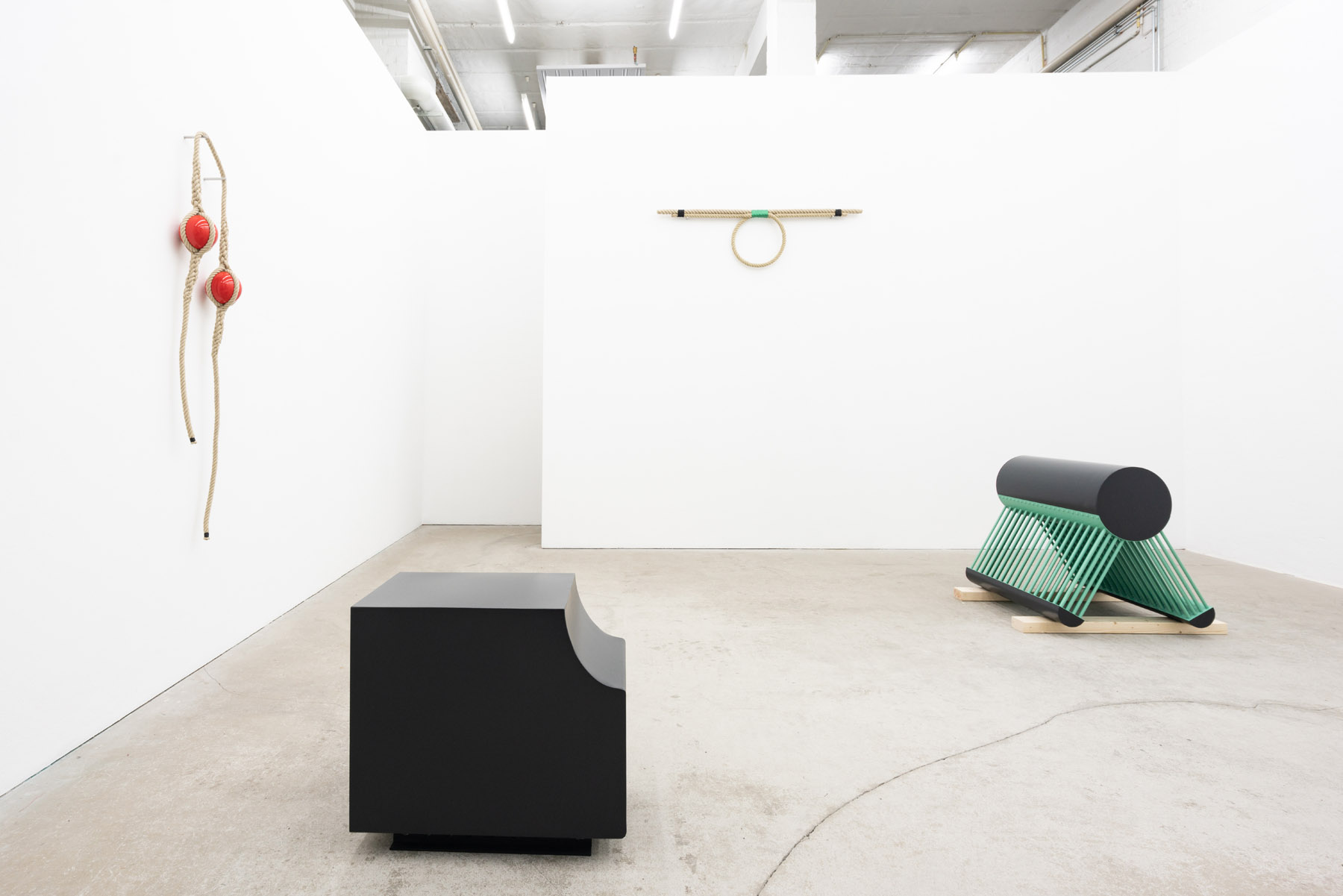 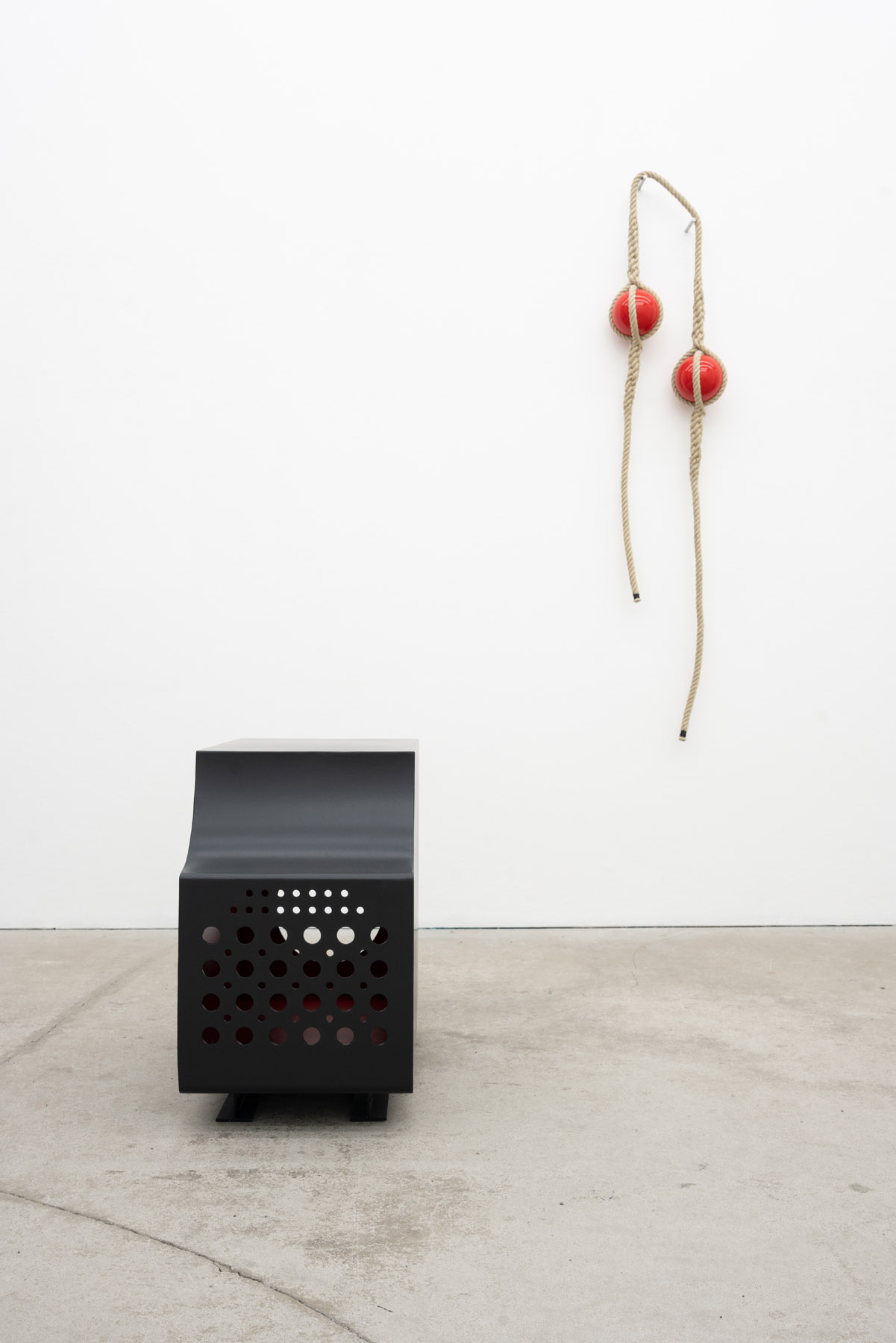 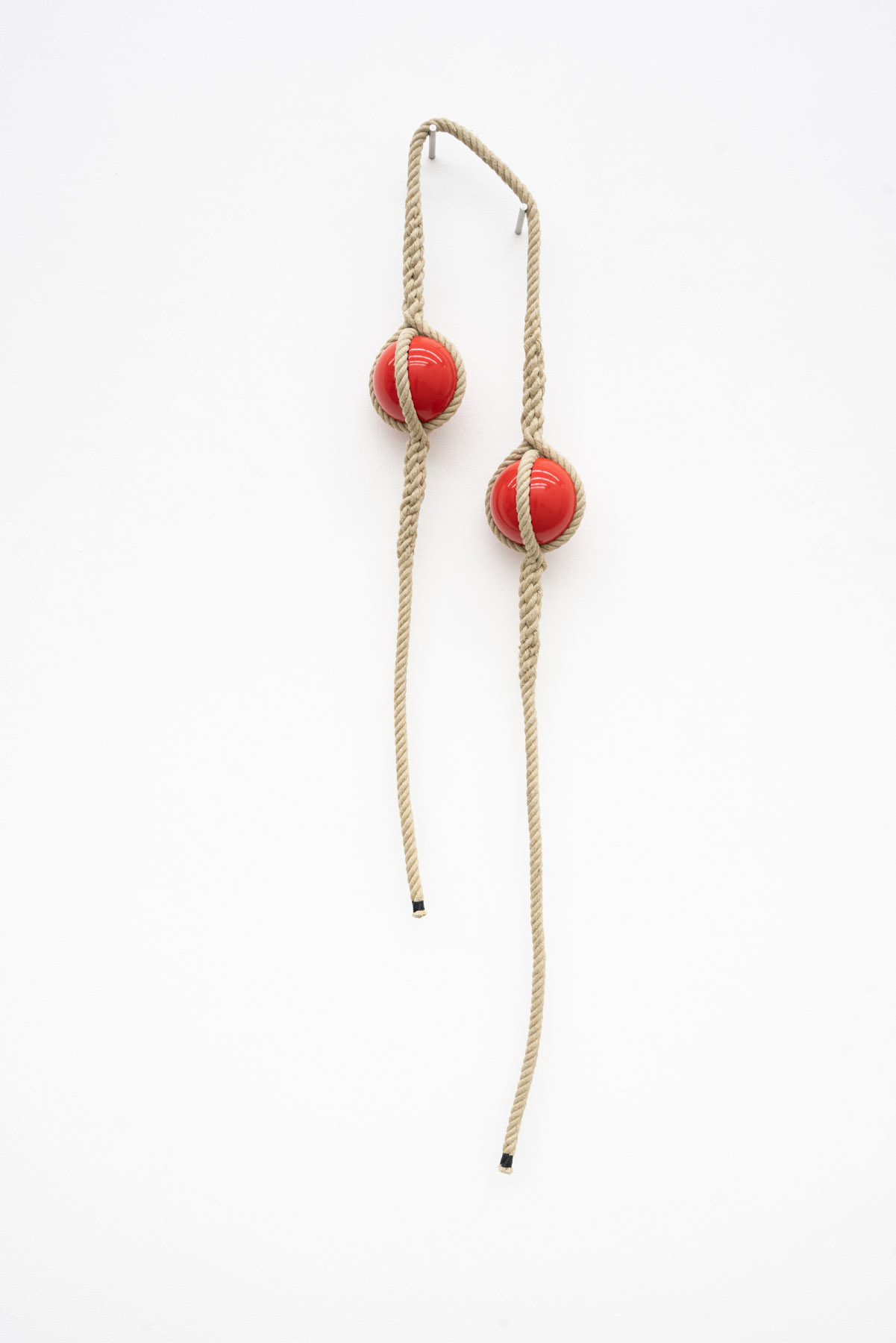 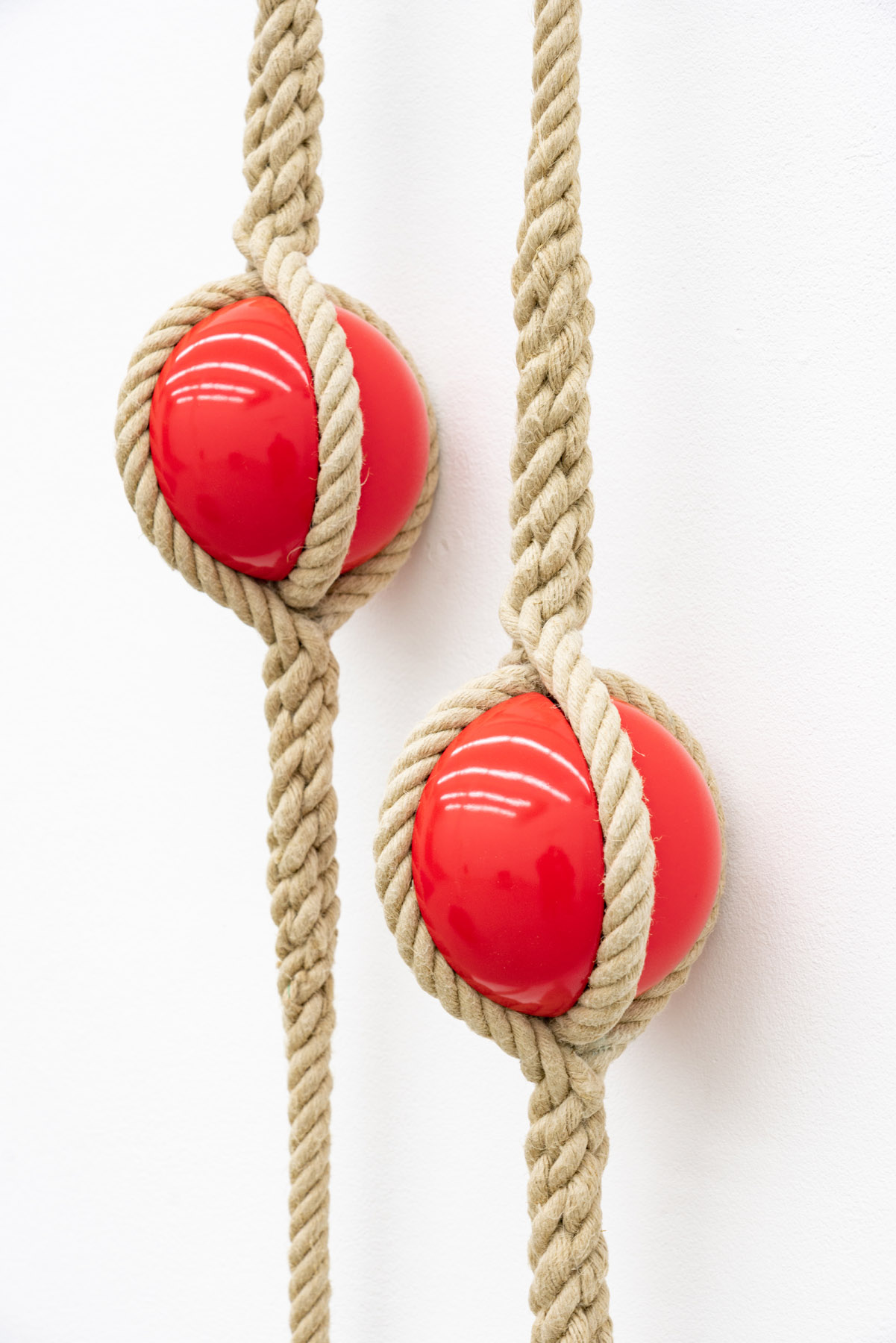 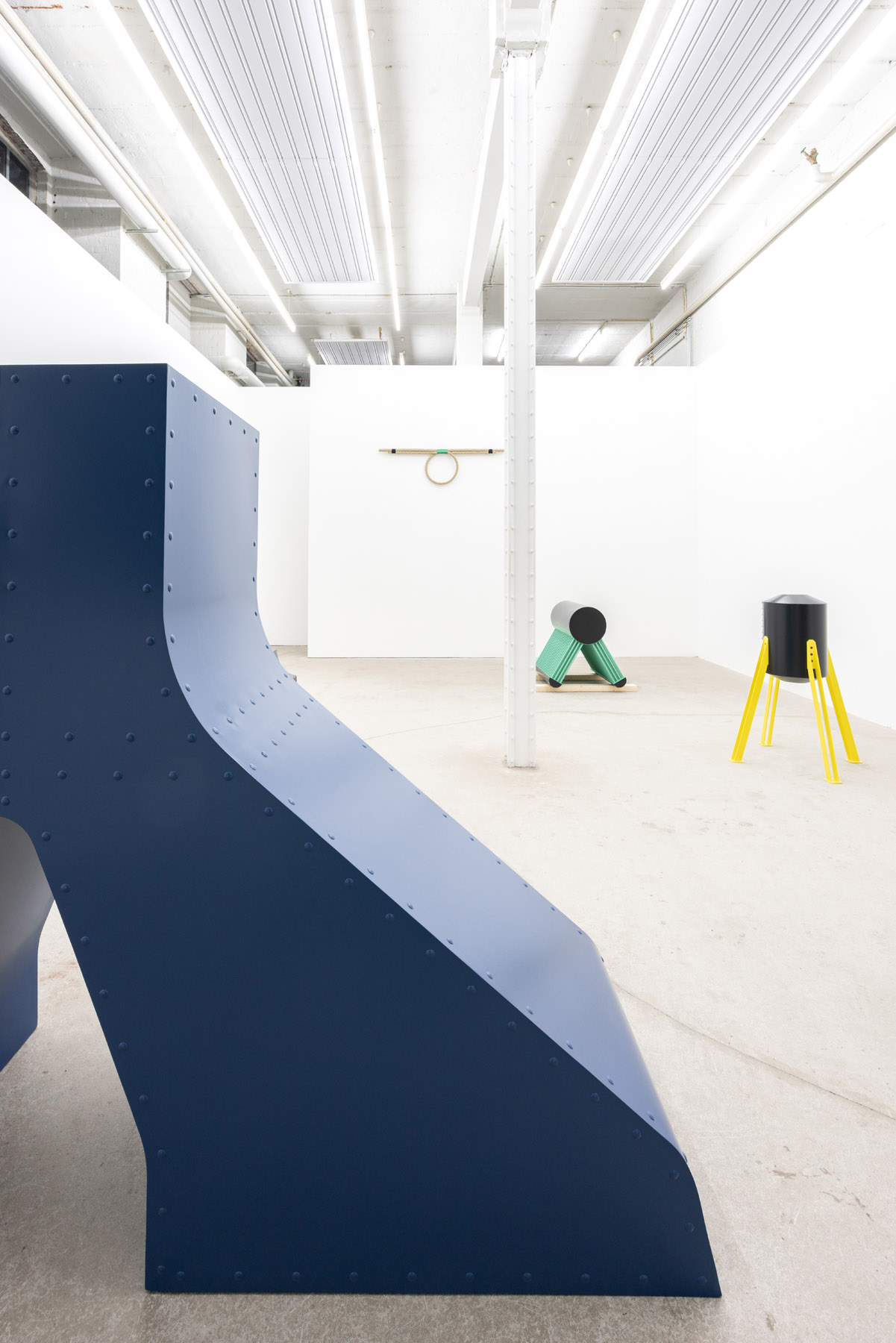 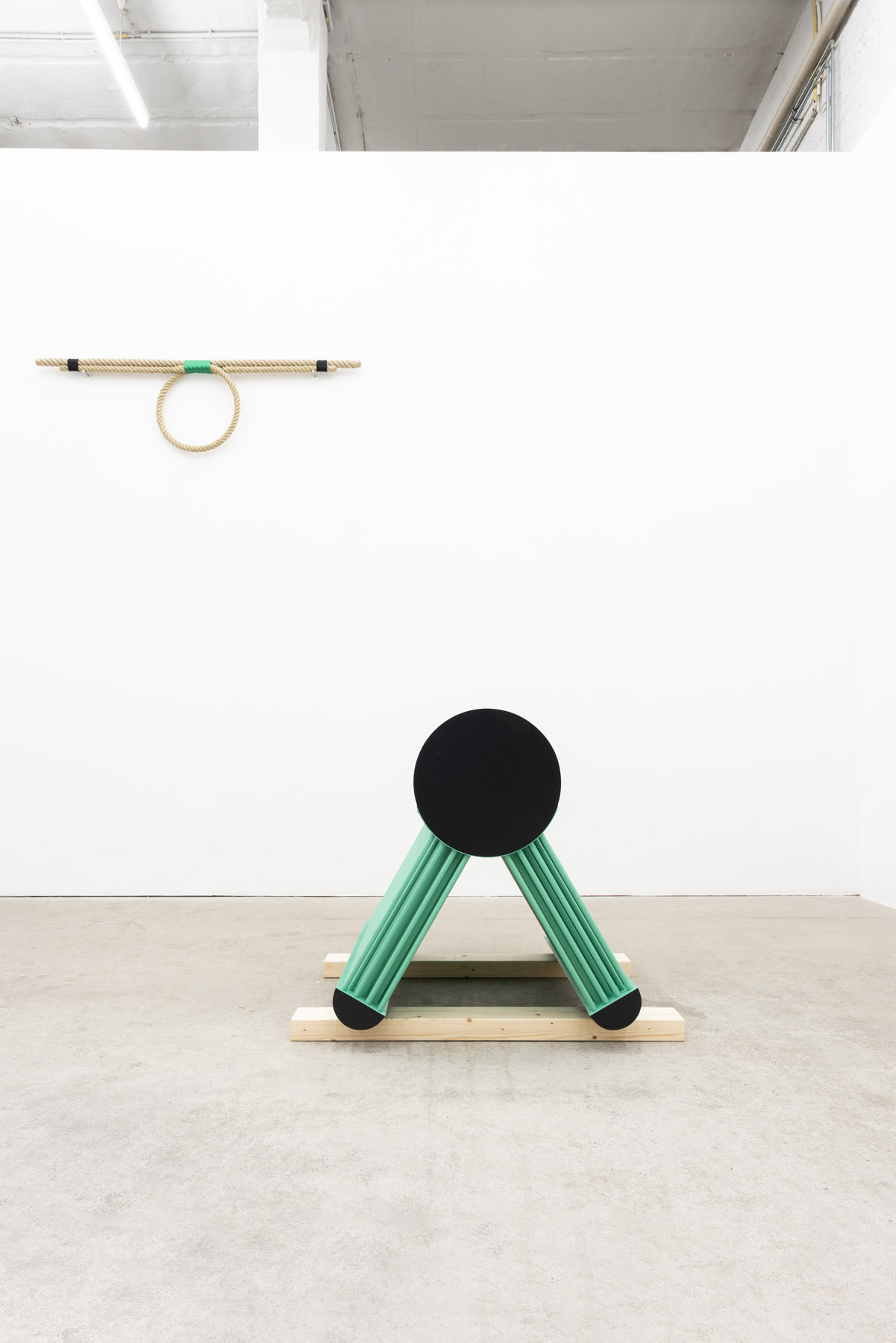 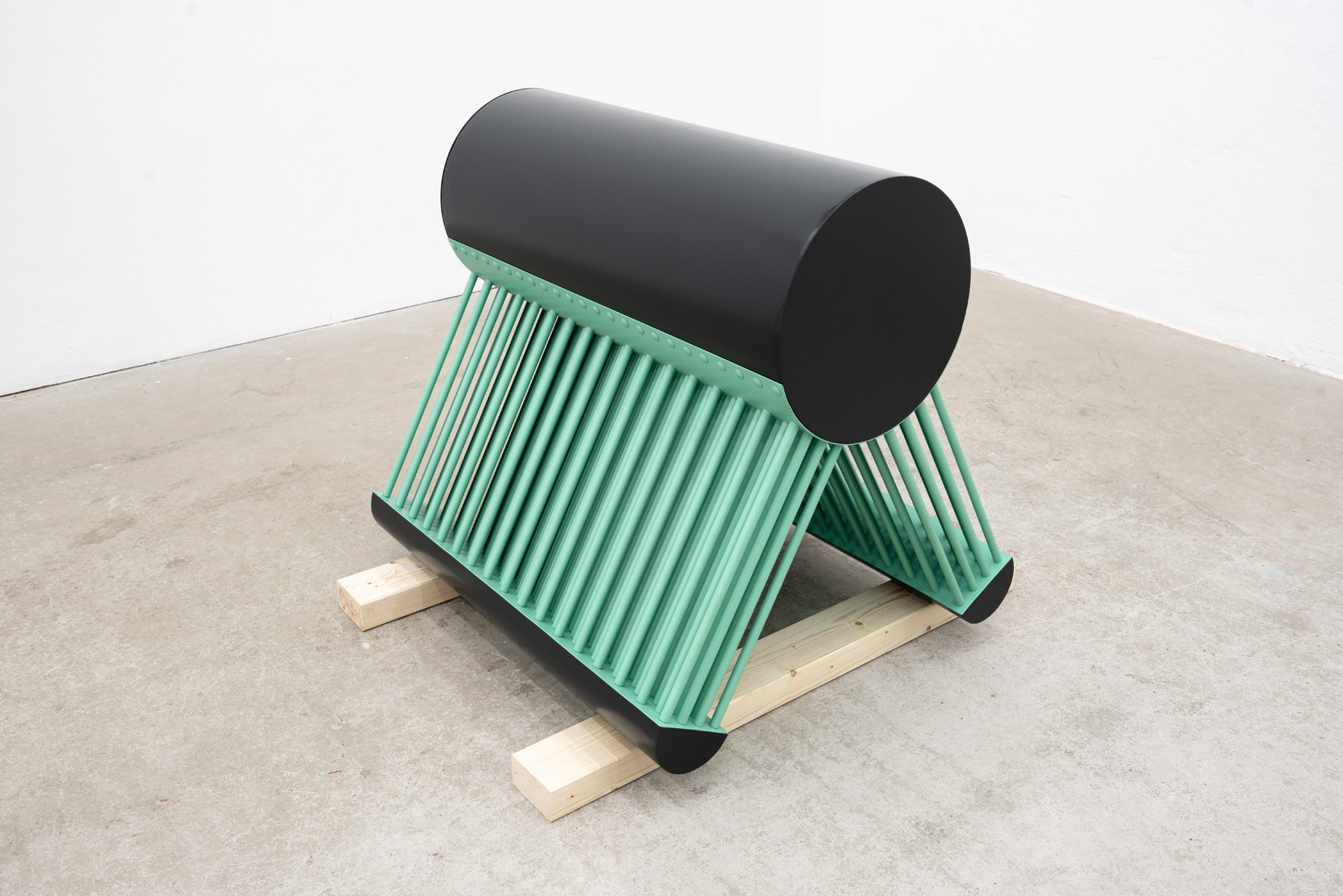 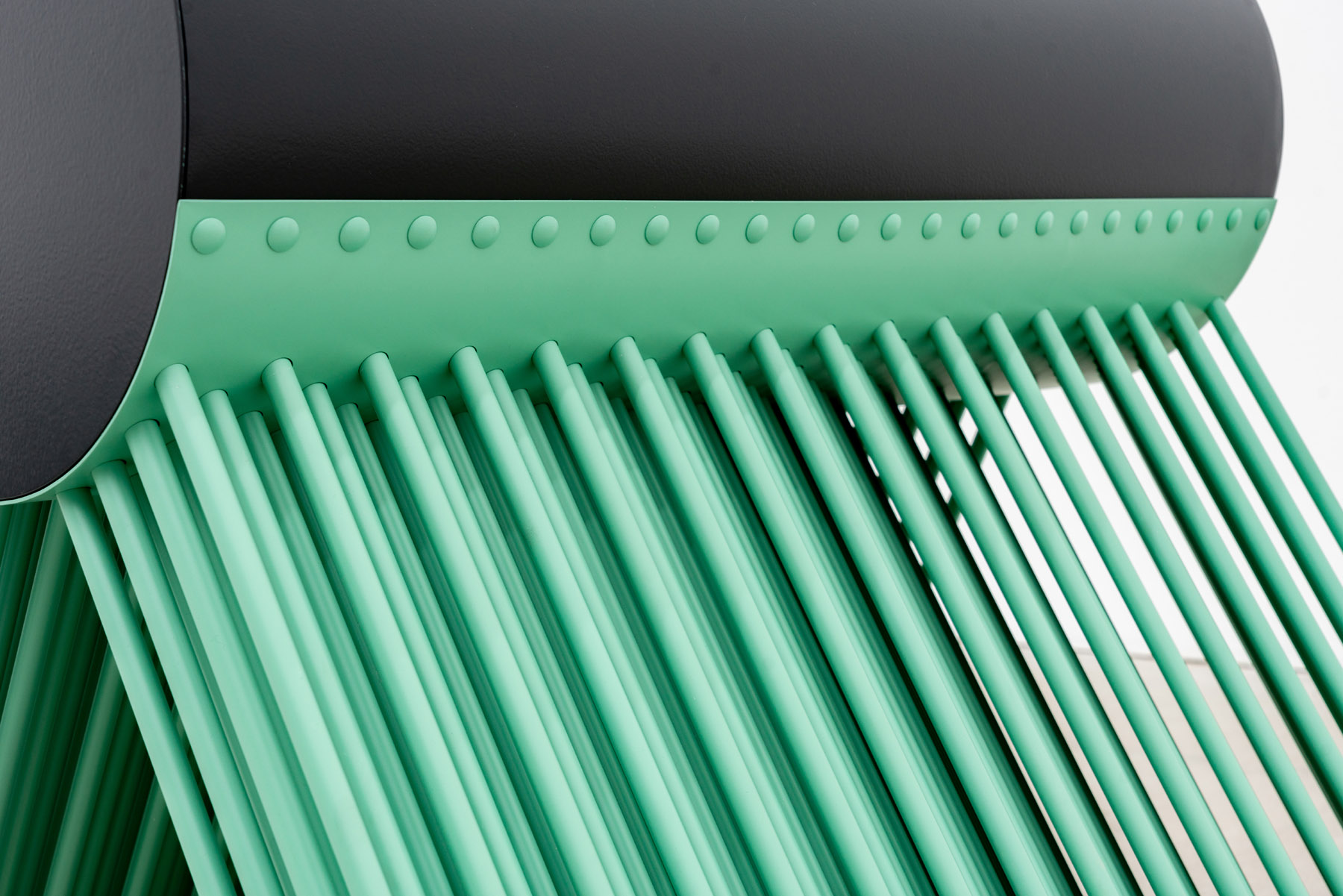 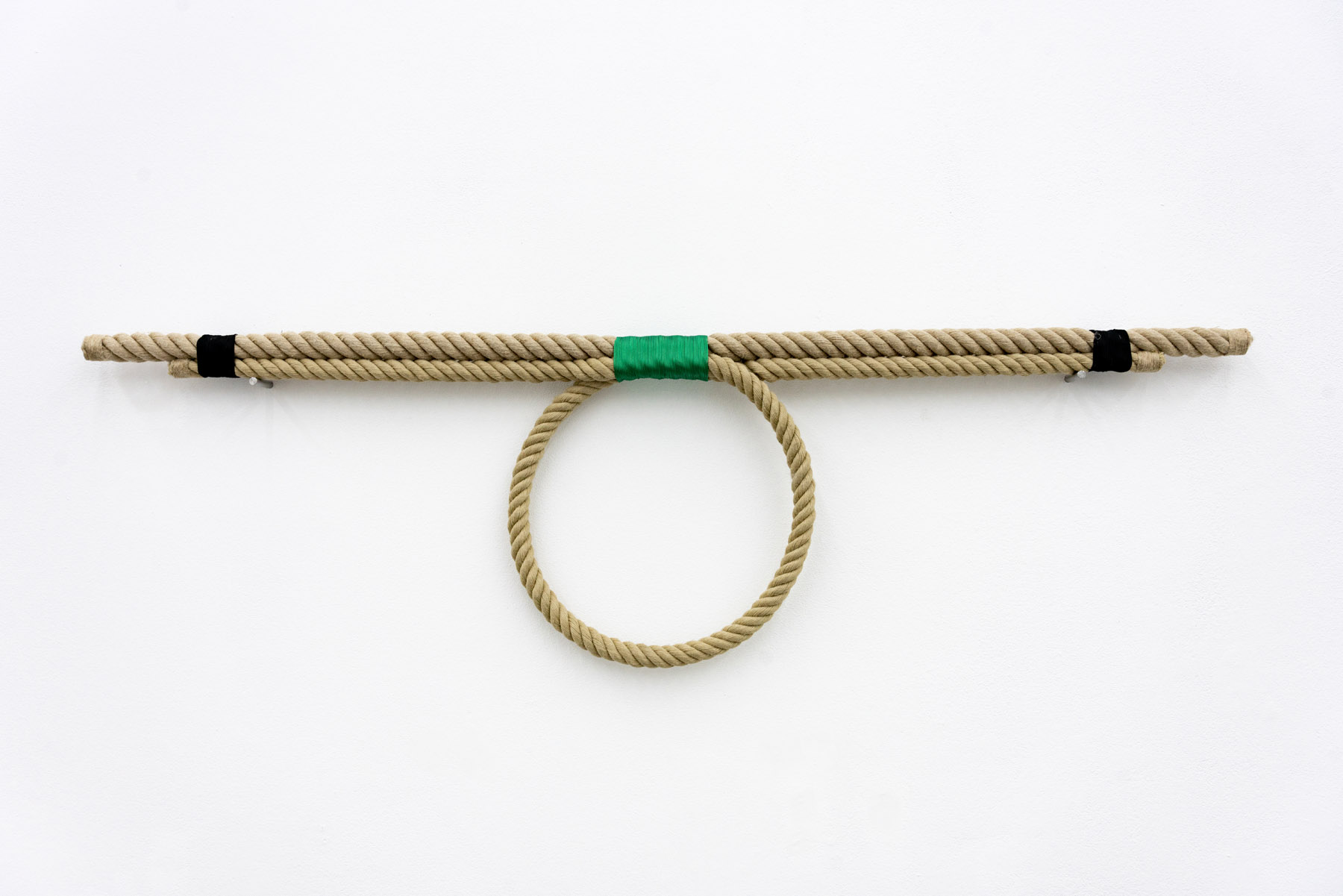 In STEAM, Eva Grubinger splices together two longstanding interests: seafaring, and using contemporary history to understand the present and anticipate the near future. The eight sculptures here, four wall-works and four floor-based works paired through colour coding, draw on the aesthetics of ships and steam engines: a vocabulary of pipes, rivets, furnaces, boiler, etc. that, abstracted, transforms into an aesthetic language. Together they allude obliquely to specific mutinies on steam-driven ships in the early twentieth century, when industrialisation was forcing the collapse of old paradigms. Today, Grubinger suggests, we are in a parallel moment, a vast shift to automation, digitalisation, biotech and AI for which a visual language arguably doesn’t yet exist, but perhaps a precedent does. Steam, pointedly, is a presence-in- absence here. It would have been required to activate all the machinery whose aesthetics these artworks draw upon – and can be both productive and dangerous. And it rises from bottom up, just as all these insurgencies came from the lower decks.

The revolts referred to are, first, the 1918 sailors’ uprising in Kiel and Wilhelmshaven, which precipitated the November Revolution, the end of World War One, the fall of the German Empire, and the Weimar Republic, which finally ended up in fascism. Second, the Cattaro mutiny – also in 1918 – in a naval base on the Adriatic sea in today’s Montenegro, then part of the Austro-Hungarian Empire, which failed due to the sailors not receiving wider support from the mainland. Third, the Kronstadt mutiny in Russia in 1921, where sailors who had helped in the Russian Revolution turned against the Soviets and were put down in a Trotsky-led assault. And fourth, the 1946 uprising in the Royal Indian Navy against the British Empire, which, though not acknowledged as such for decades, was a tipping point in achieving India’s independence. In each case, a boat – with its enclosed, hierarchical, class-reflecting system – delivered steadily worsening conditions for the sailors, who finally, at risk of court-martial or worse, could take no more pressure, and a regime change followed eventually. These cases represent a microcosm of the progress of the Industrial Revolution, where steadily crueller working conditions finally led to the establishment of workers’ rights.

The wall works, involving the kind of intricate rope-making techniques used on deck, might be seen as oversized medals for bravery in honour of men killed or forgotten, and bear key mutineers’ names in their subtitles: e.g. former stoker and engine fitter Karl Artelt, in the Kiel and Wilhelmshaven mutiny, in Untitled (Artelt) (2018). Individually the rope works contain further nudges, references, poetics: one features oversized grommets shaped respectively like a yellow sun and a black teardrop; another, a demotic evocation of male bravery, contains a pair of balls. Also the floor-based sculptures, and their references to ships, e.g. Untitled (SMS Thüringen), suggest that sailors are the canaries in the coalmine of paradigm shifts: change is prefigured on board, in that microcosm of society, and in the tightest quarters of the ship.

Additionally, Grubinger’s presentation relates directly back to the gallery’s location at the Baumwollspinnerei not only in the relation between its riveted objects and the building’s riveted columns, but also in that all the warships in Grubinger’s ghostly narrative here were built to serve colonialism and imperialism, and the Spinnerei, the biggest cotton mill on the continent at the late nineteenth and early twentieth century, leads back to Germany’s own colonial adventure in East Africa, seeking its own cotton fields. But, again, in STEAM, references to the past meet the present. Steam was a driver of modernity, whose long arc leads us to the tech- powered developments of today, and technological revolutions challenge existing socio- political constructs. The steam age and the Industrial Revolution ushered out feudalism, monarchism and the power of traditional religions, leading to a chaotic period of experimenting with new models: liberal democracies, communism, fascism. As technology advances and disrupts everything from employment to politics, we appear to be in another of those chaotic periods, not least as social securities have been eroded, climate and species endangered, and financial inequality increased globally. Pressure builds, and an invisible head of steam grows.